I was alone, walking back to my office from lunch today when I saw Sandy across the square (you remember Sandy- Cambridge guy, really nice, purple jeans).  He waved and said hello, I waved and said hello-how-are-you, and he said, “I’m well.  You are always so happy!”  I realized I’d been walking around grinning to myself, for reasons unknown.  I was surprised and just blurted, “Oh!  Well!  I love China!”

Folks, it’s official: I have totally become That Happy Person Who Doesn’t Need a Reason to Smile When She’s Alone.  This is kind of a big deal for me.  Maybe 4 years ago (and for who knows how long before that), I was That Perpetually Unhappy and Sometimes Angry Person Who Doesn’t Need a Reason to Frown When She’s Alone.  That Jenne would never have come to China (and certainly not by herself), and she had no idea about how different- how good- life could be.  Sandy’s observation today is one of the most important compliments I’ve ever received.

I have to admit that it’s possible I was A) smiling about Vilas’s 1 year birthday! or B) still in a food-hangover from last night’s meal when Sandy saw me.  The administration took the foreign teachers out for dinner to- in their words- welcome us and show their appreciation for our work.  It was one of those long, lingering meals where dishes keep appearing and wine glasses are always being topped off and you laugh so much that eventually you forget to care if you have any food in your teeth and stop covering your mouth.

The only reason I’m glad I didn’t have my camera with me is because it would surely have slowed me down, and when you’re being served upwards of 30 dishes, that’s the last thing you need.  Platters of squid, Chinese beef steak, spicy mushrooms, glutinous rice, lamb, Mandarin fish, and jellyfish were just the beginning.  I got to try the famous Dong Po pork, the most well-known Hangzhounese dish (named after a poet!  Be still, my beating and nerdy heart) and Stinky Tofu.  I call it that because that’s what everyone else calls it, and I can testify to the accuracy of the name.  Stinky Tofu is a popular street dish, so I get whiffs of it a lot when I’m out walking.  I’ve thought long and hard about how to describe the smell, and here’s the best I’ve come up with: it smells like someone is roasting pungent garbage on which they have recently vomited.  Yep.  You and I both wish I was being hyperbolic.  Turns out that it tastes exactly like roasted garbage with fresh vomit.  Mr. Shen (one of the admin) said it’s made using some sort of fermentation process.  I’m assuming he left out the part about the puke because that’s not really polite dinner conversation.

Happily, once the Stinky Tofu adventure was over, there were still so many dishes to try.  Like the fruit salad, whose relationship to fruit salad in the US is analogous to the relationship Milanese gorgonzola has with Kraft Singles.  This was served inside of a sort of upside-down nest of spun, caramelized sugar. Appetizing enough, and then our waitress poured a sweet yogurt sauce on top of the whole thing.  Two bottles of wine later, the lights dimmed and a chocolate ganache-ed cake with elaborate towers and tunnels made of fruit entered the room.  Sabrina’s birthday was on the 10th (Happy Birthday, Sabrina!), so Shen ordered a cake.  It had one fat, fancy-looking candle on it- a pink lotus blossom.  When it was lit, it actually bloomed.  I’m not overstating things when I say that last night was a feast.

Perhaps best of all, Sabrina, Trisha, and I took a walk after dinner and found a little late-night market where I bought a sweater with two fluffy rabbits on it.  And by fluffy, I mean that the rabbits are made out of a fleecy material that sticks out a good 1/4″ from my abdomen-ish area.  It also says “Happy Day” in pink embroidery.  As you can imagine, it is a freaking adorable sweater.  This must mark my full immersion into Chinese culture; at home, I would have never purchased something like this (partly because it would only be in sizes made for 5 and 6 year olds), and now all I can think about it how much my MHS students are going to love it.

I spent the night on campus, since the restaurant was nearby and I have an 8am class on Thursdays after a minor schedule change.  Though I actually enjoy my morning bus ride, it was nice to wake up late and eat breakfast at school, which cost me a whole 80 cents for 4 dishes.  Having only 3 classes on Thursdays, I taught with great leisure and found time to catch up on news from home and around the world.  One notable activity today was our first English Corner, a weekly session hosted by the foreign teachers; students can practice their English or ask questions about America (or whatever country their teachers happen to hail from).

I hosted this afternoon, and I quickly decided that English Corner rocks my socks off.  The students here are just so…eager to learn that they hang on every word, laugh easily, and ask questions that are 2 or 3 steps ahead of the content.  When I make my way back to St. Paul, I want to find something that so captivates my attention the way English and American culture does for these kids.  Sidebar: sometime you should try to explain the concept of tanning salons to someone not from the US.  Especially if they live in a culture where almost all people use umbrellas when it’s sunny to protect themselves from UV rays.  It’s nearly impossible to make this sound like a reasonable pastime.

When my classes were over, late this afternoon, I took a few pictures (Oh, springtime.  How you inspire me!) and headed to the bus stop. 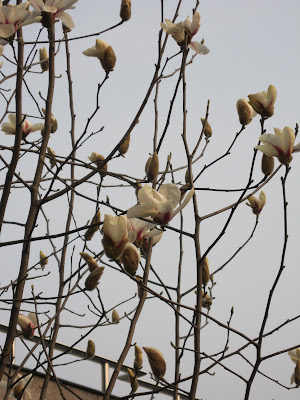 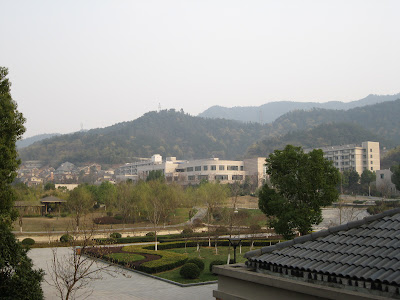 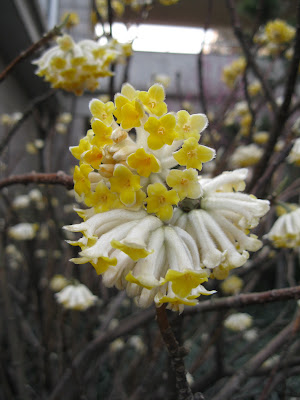 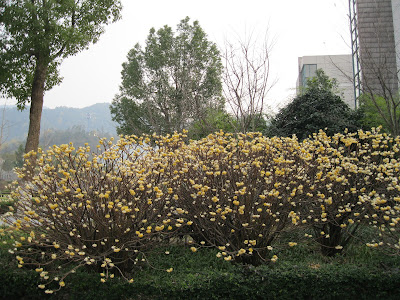 And then I took a look at the bike rack and the shining sun, and I made a decision.  Soon I was stripping off my jacket (so everyone could get a good look at my new rabbit sweater), piling my things into a basket, and heading out for home on two wheels.  It took me about 70 minutes to bike the 9 miles back to my apartment, what with traffic lights and the one-speed bike.  But the afternoon bus trip can take up to 90 minutes and the only exercise I get then is from clinging to the bar if I can’t find a seat.  I haven’t run since Monday, so it felt good to be out and moving, doing something.

But 70 minutes is a chunk of time.  It’s probably never a good idea to ride a bike with headphones on, but it’s especially dangerous to stop paying attention to sounds here, and the only downside is that you’re stuck with whatever earworm wriggles into your brain.  The pace at which I was pedaling, the basket hanging from my handlebars, and the wisps of my hair flying every which (witch) way forced me to hum the Wicked Witch of the West’s theme music every few minutes or so until I finally racked the bike.  (Guess how long it takes for that to get annoying?)  The upshot is that I think it made me feel like I was going a lot faster than I actually was.  So there’s that.

And it’s with surprise that I realize tomorrow is Friday.  Another week gone by?  Already?