The Year of the Rabbit: Part I.

What. A. Day.
First of all, on my walk this morning, a nice old man on a bike complimented my new coat!  He said, “Nice coat! Nice coat!”  Well, I think.  I should note that it’s also possible he said, “Mexico, Mexico!”, which would also make sense, given that I exude a powerful Latina vibe, but I’m about 60% sure he was noticing the coat.
Knowing that most businesses would be closed today, I planned to spend the morning by the lake because the weather was golden: sunny, mid-50s, no wind, no slushy spring melt.  It was perfect.  The roads were emptier today than they have been, but the people who were out were busy with last-minute preparations.  Fireworks stands adorn every corner, selling everything from sparklers to giant boxes of what I can only assume are explosions that would get you arrested in Minnesota.

And of course, the red lanterns that I’ve already shared continue to decorate the trees and light posts about every 30 feet.  They also light up at night.  I’ve learned they’re definitely just for the Spring Festival. 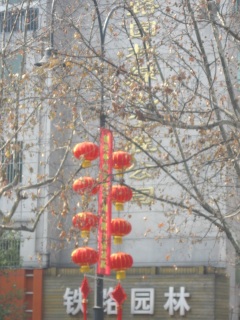 If you repeat those last three pictures over and over again for about 30 minutes, you’ll relive my walk to the lake this morning.  It was delightful.  The lake itself was even more beautiful today than it was on my first visit because of the bright sunshine, and maybe just in general because of the festive atmosphere.  I mentioned before that 2011 is the year of the Rabbit.  My biggest regret about the picture below is that because I was slow to action, I missed the little kiss this man gave to his bike passenger:

According to the foreign news coverage I watched later, pet stores have been selling out of rabbits like crazy.

While I was at the lake, taking video and scoring some great pictures of women’s fashion, Liz called.  She told me that in 2 hours, she and her husband would pick me up, take me to the grocery store, and back to their home for the big, Thanksgiving-esque dinner that Chinese families traditionally have on Chinese New Year’s Eve.  I grabbed some fried rice and a milk tea and rushed home to get ready. (First night in Hangzhou: Bao says, “Let’s get you a milk tea. Very popular.”  I say, “Ooh!  What’s a milk tea?”  He says, “It’s milk.  And it’s tea.”)  On the way back, I had to stop and take this next picture.  I’ve already mentioned that people here hang their clothes outside to dry- all the time- but today marks the first time I’ve ever seen underwear 1) hanging over a major intersection in a city of 8 million and 2) hanging adjacent to…meat.  First time. 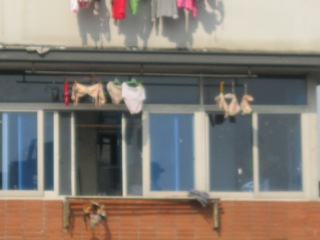 And one quick note about the milk tea before I move on to the rest of the day: If I get fat in China, it’s milk tea’s fault. (Sorry, Matt.)

Okay, so Liz and her husband, Mr. Jiao, picked me up and took me to the grocery store (Liz noted, correctly, that compared to Chinese grocery stores, Cub smells like a breath of fresh air), and then to their home, which is very near HFLS (my first glance at the school in person!).  It’s only 10 miles away from my apartment, but it’s in the mountains and though the temperature dropped noticeably from the city center, the air is much cleaner.

Liz and Mr. Jiao have a well-kept, modern apartment in a residential area of only teachers; they get to live there because she teaches at HFLS, and he teaches at Zhejiang University of Science and Technology.  Both are within walking distance of their home.  They have a 4 year old daughter, Amber (her nickname is Dodo, but her American name is Amber, so…I’ll be calling her Amber), and right now, Liz’s parents live with them to help take care of Amber.  Mr. Jiao’s mother is also staying with them, but just for the Spring Festival.  Both matriarchs, Liz told me, had been working on tonight’s meal for an entire week.  And I am the first foreigner who has ever been invited to their New Year’s family dinner.

After some chit-chat and fruit, we sat down for the 8 cold dishes (8 being a very lucky number in China).  And when I say “we,” I mean me, Liz, Amber, Mr. Jiao, and Liz’s dad.  The mothers were busy working on the hot dishes in the kitchen, but we started eating anyway (I think this is customary).  The cold dishes included: jellyfish salad, bamboo shoots, lotus roots with sticky rice, steamed dried duck, shrimp, spring rolls, Chinese celery, and…chicken feet.  All homemade.  All amazing.

Then the hot dishes appeared: eel soup, traditional meatballs from the Anhui Province (Mr. Jiao’s home), and 8 treasure rice.  By the time I’m done trying all of these dishes (well, minus the chicken feet…still working up to that), I am stuffed and prettttty sure we’re done with the meal.

So of course it’s time for the fish!  In Chinese, the words for “fish” and “surplus” sound the same, so it’s served after the main meal to signify that you’re lucky enough to have extra this year and hopefully you will again next year.  When Liz’s mom laid it onto the table, she pointed the head towards me, which honors me as the guest.  Thankfully, the fish was largely symbolic for tonight, and we didn’t actually eat any of it.  This saved me room for dumplings, the final course of the evening, my favorite course of the evening.

Here are a few pictures from dinner.  Judging by the amount of leftovers, they probably could have invited 35 other people besides me. 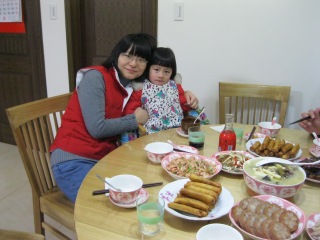 Liz with her daughter, Amber.

Okay.  This liquor is very special and apparently very expensive, but it tastes like a combination of every terrible liquor I ever tried in college mixed with ammonia and maybe a little lemon Pine Sol.  They love it.  I had to choke it down and chase it with bamboo. 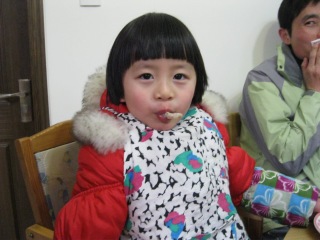 This has to be my favorite picture of the night.  While I, a mature 27 year old woman, cannot yet stomach chicken feet, it’s this 4 year old’s favorite dish.  She somehow sensed that they freaked me out and proceeded to stick them in her mouth and wave them around at me until I took her picture.  (“Auntie Jennifer!  Auntie Jennifer!”)  Which was difficult, since I was laughing so hard that I actually cried.  It was such a bizarre juxtaposition: the cutest little girl I’ve met here with the creepiest food I can imagine.  I think she ate 4 of them.
As we ate, the fireworks went from “happening often” to “happening constantly,” so Amber wanted to go outside to celebrate with sparklers.  My flash kind of ruined the effect, but it was a pretty magical ending to a pretty amazing night. 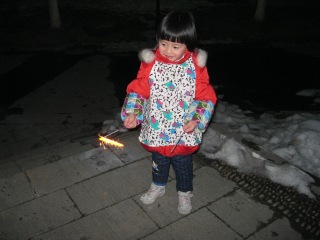 This blog post is titled The Year of the Rabbit: Part I because tomorrow, I’m attending temple with Liz and her family.  We have to hike there, so I’m wearing my dressiest running shoes.  I’m allowed to bring a camera, but you won’t see any pictures of the Buddha in Part II because that would bring terrible luck on us all.  And I’d hate to ruin a new year that already has such an auspicious beginning.  Stay tuned!