Since I’m spending all day at school tomorrow for meetings (which I’m secretly super excited for) and I start teaching on Monday, my carefree, let’s-explore-Hangzhou-whenever-I-want days are numbered.  With the gorgeous weather today- sunny and 60- I decided to check off the one major item left on my pre-school to-do list: walk around West Lake.
(*Correction: I claimed yesterday that it was 14ish miles roundtrip from my apartment, but I Gmap-Pedometered it and it’s actually just under 12 miles.  Just wanted to clear that up.)
With no Liz, Bao, or Daisy, I had to narrate this tour on my own.  I apologize in advance for the many gaps in my knowledge; some of these pictures are just of things I thought were really pretty, and I have no idea (yet) what they’re actually pictures of.  I also want to give proper credit to the source of most of my information: the Walking Around the West Lake pamphlet I got at a Hangzhou information booth.  Everything I quote comes from that publication, which has been translated into English.
First, the map I used.  I started at the Lingering Snow on Broken Bridge, in the northeast corner of the lake (I live directly north of this intersection), moved west and then south on the causeways, came east by Leifang Pagoda, and then north on Nanshan.

This is Lingering Snow on Broken Bridge.  “The Broken Bridge is said to be the place where Lady Snakewhite met Mr. Xu Xian in the folk legend.  When it snows in the winter, the Broken Bridge, particularly with the lingering snow, is the most beautiful and overwhelming.”
(*Correction: In an earlier post, I mistakenly identified this bridge as Colorful Stripe Bridge.  If that had been true, I think it could easily be renamed The Colorful-If-You-Think-Tan-Is-Exciting Stripe Bridge, so I’m happy to be wrong on this one.)
The snake lady legend is really popular around here; I saw it illustrated on a lot of fans and umbrellas two weeks ago at the museums.  The story is basically about a kind man who falls in love with a beautiful woman who turns out to be a white snake (doh!).  In early versions, she is evil and the man is saved by a monk.  In later versions, they’re in love but doomed because he’s a man and she’s…a snake.  So it’s mostly known as a romantic story now. 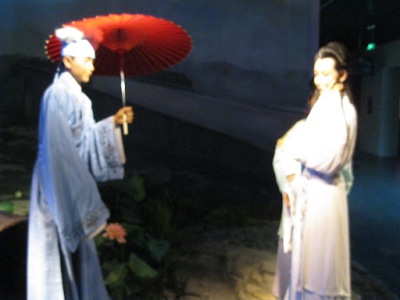 This is a display from the umbrella museum of Lady Snakewhite and Mr. Xu Xian.
These next pictures are views from the Su Causeway.  This was an absolutely beautiful path with water on both sides.  I can honestly say I was enchanted during this part of my tour. 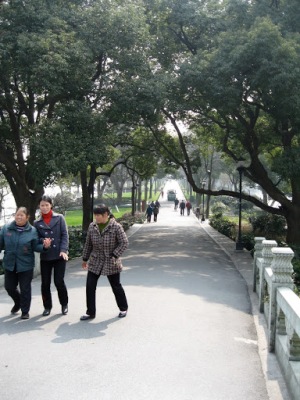 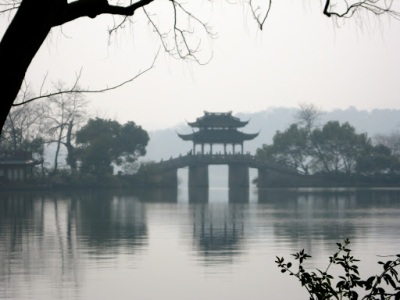 I’m not entirely sure what this structure is (I think it’s just called a pagoda bridge), but just beyond it is the Winery Yard and Lotus Pool.  There’s an old brewery here that’s been converted to the biggest lotus garden in China, where 200 varieties of lotus live.  Holy amazing.  I will probably be camping out here this spring.

There are 3 major islands in the middle of the lake.  This is Lord Ruan’s Mound.

This is just a charming cottage-y house I saw on the Bai Causeway.  I want to move in like yesterday! 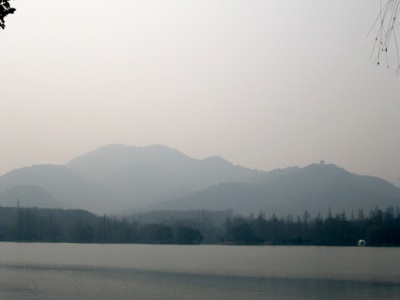 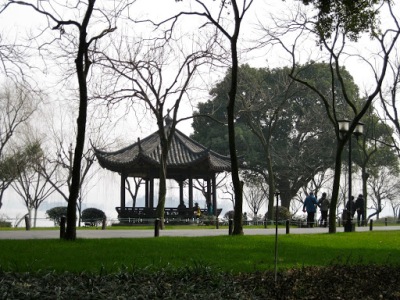 This couple just made me happy.

Whoo!  The first Hangzhou runner I’ve seen!  By the way, I am totally faster than him. 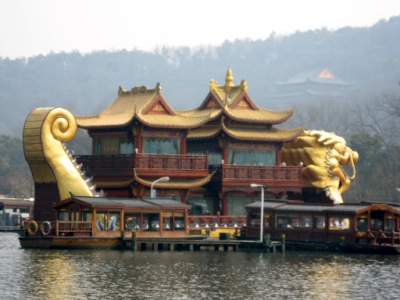 These next pictures are from the Leifang Pagoda, which is where some legends say Lady Snakewhite was banished.  Leifang Pagoda is a really, really famous place in Hangzhou.  There were tons of travel groups hanging around today.  According to my pamphlet, “Leifang Pagoda was first built in 977 by King Qian Hongchu of Wuyue Kingdom to celebrate his Concubine Huang giving birth to a son.  Originally called Concubine Huang Pagoda, it was later renamed Leifang Pagoda because of the “Leifang” Mountain, on top of which it is located.”

This (greenish) pool is at the base of Leifang Pagoda.

This picture shows the stairs leading up to the pagoda.  You can climb all the way up to the top.  I will definitely be doing this soon.
The pagoda is clearly amazing, but I was happy to move on from this part of the path because as I said, it was really crowded with tour groups, and to be honest, seeing a tour guide with a little flag and mobile microphone brought back some…difficult memories.  (Too soon!  Too soon!)

So this next group of pictures is from the Nanshan Road side of the lake, which is decidedly more “urban-tastic” than “pastoral wonderful,” although there are some beautiful flower gardens on this side (which have already begun blooming!).

Most of the maintenance crew members in the city use brooms to sweep up litter, but this man was using what I can only call Giant Chopsticks, because that’s exactly how they functioned.  This guy’s got mad skillz. 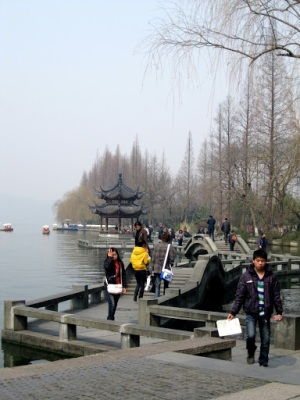 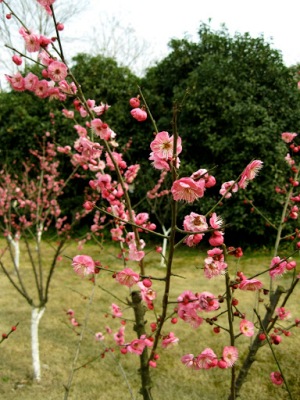 I wish so much that I knew what these blossoms were.  Anyone else know?  Suffice it to say that they filled the air with springtime smells.  Beautiful. 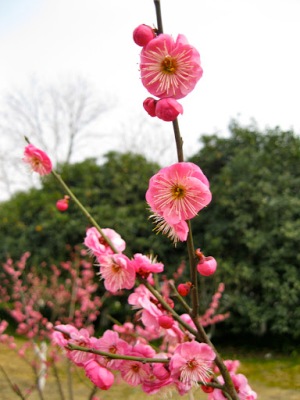 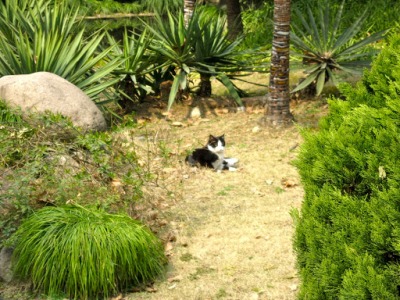 Eeee!  Stay away from me, cat!  I like China and I want to stay here! (This picture is dedicated to my pal Ellen, Friend of All Things Feline.)

These next photos prove what Bao told me and what Liz confirmed: there is some serious money in Hangzhou. 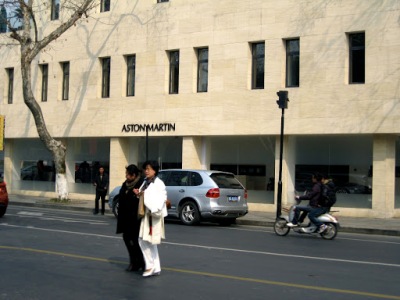 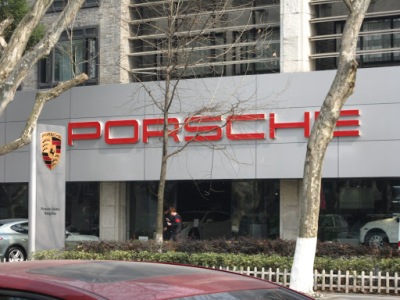 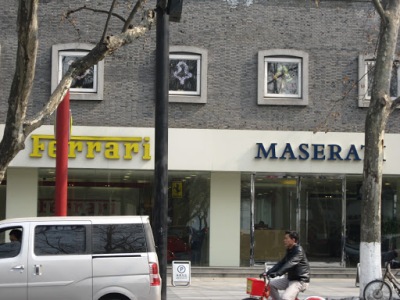 I learned today that West Lake used to be called Golden Buffalo Lake, back in ancient times.  “According to legend…there was a golden buffalo under the lake, [and] every time when the lake was dried up, it would emerge out and spit water to fill it.”  I kind of love this story.

It’s probably bad luck to take a picture of a monk, but he looked so, so peaceful sitting in this otherwise noisy skate park.

A statue of Marco Polo.  My pamphlet calls him “the Italian tourist,” which I think is awesome.
One note I have to make as my photo tour leaves the lake: my camera is built for convenience, not picture quality.  It’s hard for it to capture just how beautiful Hangzhou is because of the light haze of pollution that hangs around.  Don’t get me wrong: the air pollution has not been bad enough to be an issue for me at all yet.  I don’t notice it in my lungs or nose or throat- only in pictures.  The sun was warm and lovely today and lit up everything on the ground, but as Liz noted, the sky is rarely blue here.  It’s mostly a bright shade of yellowy-white.  (We both miss the blue skies back in the States.)  So I guess my point is that you should all just come to Hangzhou and see it firsthand because I feel like my pictures do a poor job of relating all of its splendor.  Anywho.
This last image is from my walk back up Baochu Road to my apartment; it’s a banner hanging outside of a restaurant.  I just like the way its message is phrased.