I’m planning a big weekend of Starbucks and lesson creation, so I want to leave you with something to think about until I can tell you about my first day of classes.

Two weeks ago, I was walking by the lake and I came across this group of people.  Because they were busy watching something else, they didn’t notice me with my camera. 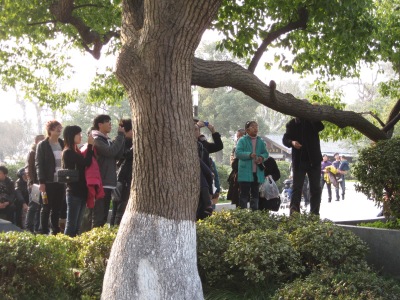 You might have to click on the picture to be able to see it, but there’s a squirrel on the branch, and that man in black is trying to feed it a bagel.  Many people in the crowd are shooting cell phone videos.  I stayed long enough to confirm that the squirrel accepted the bagel, and when I walked away, I thought this was probably an isolated incident.  Maybe they were a bunch of budding zoologists.  Or bagel zealots.  But later, when I took Trisha to the lake for the first time, we saw another squirrel attracting a lot of attention, this one running on the sidewalk with some sort of nut in his mouth.  The people following him reacted like I would if I saw a little wild monkey or maybe a really, really gigantic bug.  That squirrel was a big deal.
So I propose that you take some time this weekend to appreciate the return of the squirrels from their quasi-hibernation.  Consider yourselves lucky that there are more of them in your backyard (and let’s be honest, squished on the road in your neighborhood) than in all of Hangzhou.
Have great weekends!