If my bed had been one step farther, I don’t think my legs could have carried me there last night.  I would have slept on the ground with my head resting on my one outstretched arm, drooling onto my hardwood floor.  Yesterday, Trisha and I saw a little bit of Shanghai- which is, I think, a lot anywhere else.

I flew into Shanghai 8 weeks ago, but all I saw then was the dark gray air of bad weather and maybe a little pollution and the stretches of anonymous highway that lead out of the city.  To be honest, this first and completely false first impression made me a little indifferent about visiting Shanghai, but I summoned some interest based on the reports of other people.  Plus, I had to figure out how to get there at some point since Matt will fly into Pudong International Airport in 3 1/2 weeks and I’d like to be there to see him when he lands.  I have this sort of romantic notion that I want to be with him during every second he’s on this continent.  (Don’t judge me.)

This great expat magazine that Trisha and I picked up somewhere (either at a bar or at this Mexican restaurant we discovered) provided these (really detailed) instructions for getting to Shanghai: Take a bus to the station, buy a ticket near the KFC (have I mentioned that these are everywhere?), take the train, and take the Metro line 2 into the city.  Done.  I was pretty dubious that it would be that easy- I did just try 85 different ways to buy plane tickets here, to the point where I was crying out to my computer, “Please China!  Just TAKE my MONEY!”- but actually, it was. 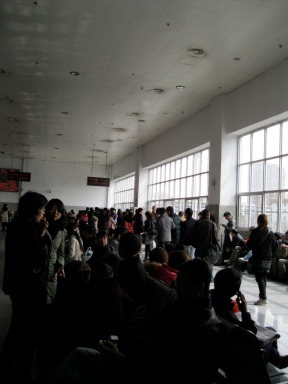 The line at the train station.

The train was spotlessly clean and roomy with wide windows and soft reclining seats, and it was warm.  Which means I instantly fell asleep as soon as we started moving.

The bullet train.  It looked surprisingly…short.  But also- and unsurprisingly- really, really fast. 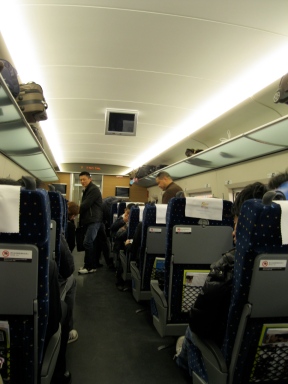 The comfortable cabin.
Upon arrival in Shanghai, our train burrowed right into a tunnel, and then Trisha and I squeezed onto the subway to make our way into the city, so we didn’t actually step out into daylight until we hit The People’s Square.  And this is what we saw.

I think I was sort of giddy shooting this video.  Everything was just so easy: we had ordered our train tickets in English, we knew which Metro line to take, and suddenly we were staring at George Clooney in the biggest city either one of us had ever been to.
We went to Shanghai without a plan, or maybe more accurately, we went knowing that our only plan was to get there.  Once we’d arrived, our schedules were wide open.  So we just started moving.  I saw a tower in the distance, and we decided to head towards it.

I spent a lot of yesterday just staring and staring.  Not a lot of thinking going on.  I usually love to know what I’m looking at, how it fits into its surroundings and what its history is, but yesterday was sort of perfect.  I know I’ll have many opportunities to travel to Shanghai in the future, and the first trip might have overwhelmed me with sheer size and (even though I kind of hate this word, I can’t help using it) grandeur if I’d been thinking about what I was seeing.  So I just…absorbed. 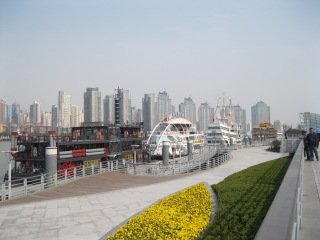 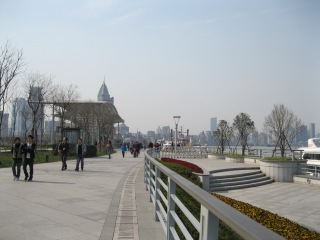 I learned later that the part of the city we spent most of our time in was called the Bund, and it’s one of the most touristy spots in Shanghai.  This explains the relatively high concentration of Western faces we saw (relative compared to Hangzhou), and it also explains why a Chinese woman dashed in front of us, spun us around to the left, and posed quickly while her friend snapped a picture.  To her credit, she did shake our hands in gratitude afterwards, but I still can’t imagine assaulting any stranger in this way just for a photo.  Well actually, I take that back.  I’d definitely grab Dustin Pedroia.  And Marcus Mumford.  And if I’m being totally honest, Justin Bieber.  But that’s it.
In the Bund, we stumbled upon a few good finds: a sushi restaurant and an actual brewery (owned by real Germans!) and this view.  The Oriental Pearl Tower- which starts and ends this video- is one of the most recognizable skyscrapers in the Shanghai skyline (or at least, it is to me); guess what it is?  A TV antennae.  The most astonishing TV antennae I’ve ever seen.
//www.youtube.com/get_player
Quick correction:  I state in this video that Shanghai has a population of 12 million people, but that number is hard to substantiate.  If you include the metropolitan area, the number according to most sources is more like 18 million.  Making it the biggest (modernized/Westernized) city in China and one of the biggest cities on the entire planet.
In stark contrast to the sweeping views of tower after tower were the small little alleyways full of street food vendors and shops and Chinese people.  Heading down these streets assured me that we were still in China. 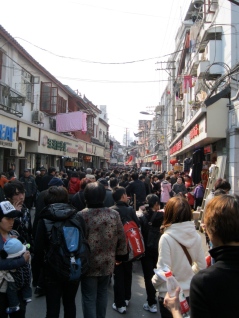 I’m going to use the word “stumble” again because it’s what we did all afternoon.  With no direction, no plan, and no map, we just oriented ourselves to the tower nearest our subway stop and stumbled our way up and down nearby streets.  Sometimes we were looking for something: food (I ate this pile of fried dough that tasted exactly like an Awesome Blossom) or wine (we found a place called Avalon that served some goooood reds) or something new to look at (a promise on which Shanghai delivered beautifully).  Mostly we just took a look at our options at any given intersection and intuited the route.
I can’t really grasp with my tiny human brain how much there is to see and do in Shanghai, or how many people share that space.  I commented to Trisha early in the day that Shanghai would be the biggest city I’d ever been in, and after sleeping away my slack-jawed wonder- or maybe just letting it sink in- I woke up with sort of a shiver.  Have you ever seen the Truman Show?  It’s a movie about a man whose life happens in a literal bubble so that TV crews can film it.  There is this moment- the moment he escapes- when he sails to the physical edge of his world.  The fake sea meets the fake sky and through an exit door, he leaves.
Yesterday, I felt like I was pressing up against the edge of something.  Not necessarily the edge of my physical world, but…well, yeah, maybe that’s exactly what it was.  I was in one of the most populous cities in my known world.  There aren’t many places on this earth that can offer something bigger.  I experienced a true limit, being there.  Which is ironic since I’m sure that in many ways, Shanghai is a limitless place.  But standing in the middle of a place so unbelievably gigantic and urban takes away the possibility of More, of Bigger.  This idea of a city that’s more…cityish than say, a place like St. Paul or Chicago or even NYC, has gone from a thought floating in the ether to this heavy, real thing.  Like a bubble that bursts and suddenly becomes a bowling ball that I have to catch.  It’s not like because I’ve seen this one incredible place, elite in its size, that I’ve seen everything, but I don’t think I’ve ever seen where my fake sky meets my fake sea before.  And the thing is- it’s all real.
What a trip.