Qing Ming Part I: Spring’s Out and Squatties Are In

Sometime around midnight last night, Trisha and I were walking back from a successful trip to a new bar/restaurant, Eudora, and I was eating fried noodles that I’d just purchased for 5 yuan from a street vendor.  What is remarkable about this wasn’t just that I was talking, walking, and simultaneously eating with chopsticks (although when I realized how good my chopsticks skills had become, I felt like I’d passed the Chinese citizenship test), but also that I was walking at all.  I’d left home at around 9 that morning in search of my students, who were hiking in the hills somewhere for their annual Spring Outing, returned at 2pm, showered and then immediately headed out again to meet Trisha and Sabrina at Eudora, which was another 4 miles away.  4 miles we walked again at the end of the night.  All told, I spent about 7 hours yesterday walking and hiking.  Definitely a quality way to spend a sunny, 75-degree Friday.

I actually never found my students.  (I know.  Me?  Lost?!  Shocking.)  I had a map from the school, but all of the landmarks were noted in Chinese characters, which pretty well limited its usefulness to me.  I kept calling Liz to see where they were, but she wasn’t ever sure which teahouse/garden/mountain path they were near/in/on; I did my best to track them down and eventually had to throw in the towel.  But I wanted to stay out and have my own personal Spring Outing, so I took all new paths and was reminded again of how much I haven’t seen of Hangzhou.
//www.youtube.com/get_player
At some point, I ended up in these tea fields.  Here I took off my headphones and was stunned by the quiet.  Somewhere, one of the people harvesting tea leaves had stashed a radio that was playing some soft, dissonant Chinese music- old school Chinese music- and other than the occasional bird chirp, it was pretty peaceful.  It was restorative to see so much green space. 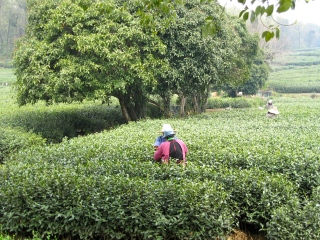 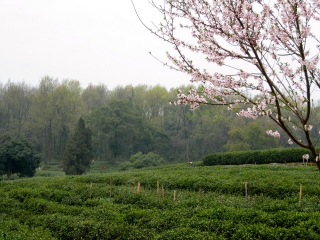 As I rounded to the east of the tea fields, I started getting closer to the lake.  And my heart gave a little leap as I came upon this couple, taking wedding pictures.

And then…I saw another couple.

And then…2 more couples. 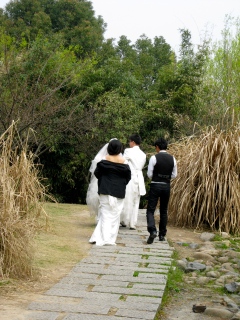 Pretty soon, I was more puzzled than romanced.  I still don’t know if any of these couples had really just gotten married, or if they were all out on photo shoots for bridal dress stores or photographers or salons.  All of the couples were accompanied by at least 2- but usually more- photographers using fancy equipment and imagining photo-worthy moments.  One of the photographers I saw asked the bride to look down at her bouquet with a sorrowful expression.  He then asked the groom to run up behind the bride and surprise her; what he wanted, I gathered, was that moment where her face would turn upwards and joyful in one movement.  Staged or not, it was really sweet.  No one was taking pictures with family members or attendants, but maybe pictures are just for the bride and groom.  Whatever the case was yesterday, it was fun to see so many beautiful dresses against such a pretty backdrop.
Naturally, white dress after white dress inspired me to shoot my Squatty Potty video.  (How’s that for a segue?)  More accurately, I found a nice clean public restroom that was also empty, and I just carpe-diemed the moment.  A few disclaimers before you watch the video:
1)     As I’ve become a more serious runner, I’ve met and spent time with serious runners, and serious runners talk a lot about things that- how should I put this- happen in the bathroom.  Because Trisha is a serious runner and we now live together, you can imagine what sorts of topics are very popular in our apartment.  I’m telling you this in an attempt to put this clip into some kind of context in case you’re totally grossed out that I took a video of a public restroom.
2)     This is a really nice restroom, on par with the staff one at work.   Most that I’ve visited are not nearly this comfortable, but you deserve the best, dear readers.
3)     When I talk about the foot pedal flush maybe halfway through the video, I misspeak and it’s confusing: what I mean to say is that even when the flush button is up much higher on the wall, I use my foot to push it.  I just sort of kick it back behind me like a horse pushing her way out of a stall.
Okay, enough preamble.  Enjoy.

I don’t mention in the video that some of the best squatties- in my opinion- have built-in shields either on the sides or ends of the squatty.  This is a particularly good idea because the one unsanitary aspect of the whole process is the risk of splashing.  (I 100% understand now why the Chinese people I’ve met are adamant that all who enter their homes remove their shoes.)  The shields really eliminate that risk.   If squatties ever become popular in the States, I hope they’re built with shields and foot pedal flushes.
After the restroom adventure, I walked up to the north end of the lake, towards home.  The swans were enjoying the weather too, and in a weird way, they reminded me of the brides flocking together on the other side of the lake.

I ended my day by climbing Baochu Hill, which is within a few kilometers of my apartment (I live on the corner of Wen’er Lu and Baochu Lu).  At the top is Baochu Pagoda, which looks like this from the street:

Given Friday’s cheerful sun, I was treated to some outstanding views of the lake on one side and of downtown on the other. 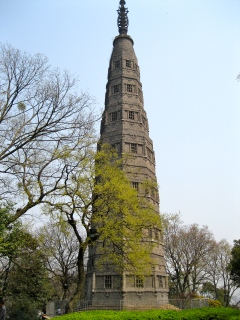 Even though it felt completely unnatural to be headed to work this morning, I’d trade a Friday of sunshine for a Saturday morning of teaching any day.
Over the next 3 days, families will celebrate Qing Ming, or Tombsweeping.  I think the idea behind it is something like our Memorial Day: honor and remember your ancestors.  Since we don’t teach on Monday or Tuesday, Sabrina, Trisha, and I are headed to Suzhou, a nearish-by town with (much like Hangzhou) a reputation for beauty (although it’s smaller).  Since there is an “old China” part of the city and some reportedly amazing gardens, I hope to have a lot to write about on Tuesday- hence Qing Ming Part I.  So enjoy your weekend, eat some tuanzi (you know, those green rice cakes with prune puree in the middle that we always eat during Qing Ming), and celebrate your ancestors.  And take a picture in your wedding dress.