Actually, I don’t think I was on the airwaves long enough on Sunday to warrant my own station call letters, but 1) a girl can dream, and 2) the experience we had at the Hangzhou Library was well worth the trip.

The library is in an eastern part of the city that I’d never been to; Delia told us it was being newly developed, which we could see in the giant, sparkling centers of business and the half-finished, soon-to-be-sparkling condos and apartments.

The library itself is a recent feat of modern architecture (or maybe it just looks that way to my untrained eye).  I know other things happen in libraries, but to me, the Hangzhou Library is a grand monument to Reading and All Things Literary, and it made my heart swell with pride when I first clapped eyes on it.

After our thoughtful taxi driver (he’d provided us with water on our hot cross-town journey) dropped us off, Delia led us into a small theater where the show would take place.  On the way, we passed a sign directing interested parties our way. 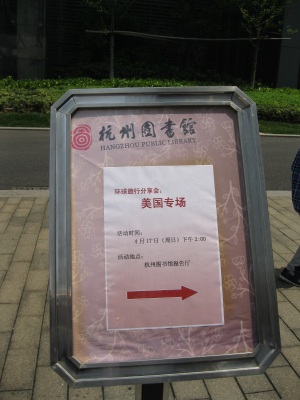 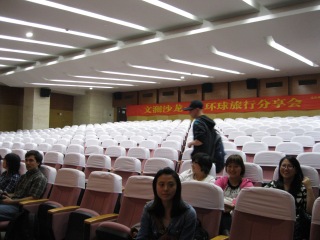 We waited while the people running the show (namely Richard) monkeyed around with sound and projectors and computer-y gadgets, until we ran into our friend Effy.  We’d met Effy the first time we met Richard; she’s finishing her undergraduate degree next year, but at that first meeting, I was sure that she was a graduate student because she seems so much more grounded than I was at 20 or 21.  Anyway, it was great to see her again, and then I remembered (duh) that she’d be presenting.  She spent time in New York last year, and Richard’s whole idea for this program was to share places of cultural clash, both physically and metaphorically.  (I’m using “clash” in a debate-ish way, meaning those places where the exact same idea is presented in contrasting ways.)

Soon, people began poking their heads into the auditorium and filling the seats, and when the lights dimmed, the Hollywood-skinny hostess, who was sitting next to me, jumped up and in big strides for a person wearing such high heels, alighted the stage.

I’m not sure why this hadn’t occurred to me, but as soon she started speaking, I realized the entire program- minus Sabrina’s speech and our Q&A- would be in Mandarin.  As presenter after presenter took the stage, I had to remind myself that there was an interaction happening between the speaker and the audience.  Points were being made, pictures explained, and it was all flying right over my head into the ears of the many Chinese who’d joined us.  I was thinking a lot about when and where dinner would happen while reflexively laughing when the audience did and cocking my head to one side to show that I was listening.

Sabrina then took the audience on a virtual tour of the sights she’d show them in Minnesota if they came to visit.  She had pictures of the MSP airport, Target Field, her home, and the lakes.  The gigantic monitors flanking the stage were perfect for showing off the blue-sky beauty of Minnesota.  Though most of the audience spoke some English, Delia acted as our excellent interpreter for the day. 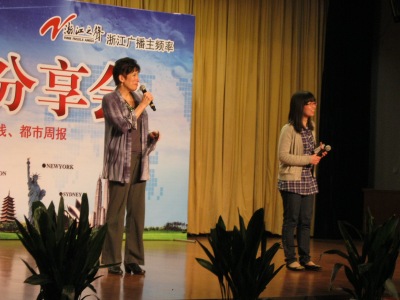 Next, meet Will.  Will is a graduate student at Zhejiang Technology University, where he’s been under a Chinese-Only Pledge for several months.  (From what I’ve heard, he could get kicked out of his program and sent home for speaking English, and although he was granted a brief sanctuary during the radio show, he rarely said anything in English.)  His Chinese sounds flawless to my ears, and the people at the radio program loved him.  He also did a backflip off of the stage, which definitely earned him some fans.  I have no idea what his speech was about, but it involved some spitting and squatting, so I can hazard an educated guess that it was hilarious. 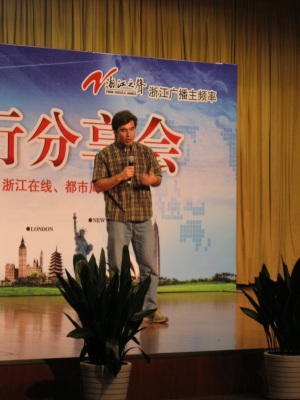 He gave an impassioned speech unaccompanied by pictures or videos, and the audience paid close attention.  When he was done, he moved seamlessly into a short trivia segment to liven them up before our Q&A.  Before I knew it, he was motioning for us to join the hostess up on stage.  The lights were hot and soon I was sporting that stretched-out fakey smile that you get after taking one too many prom/wedding/senior pictures, but I really was enjoying myself.  Some of the questions:


What is the best way for travelers to learn English before going to the US?
How much are you selling your house for? This one was directed at Sabrina.
What kind of men do American women prefer to date? Trisha and I answered this one, and though we had good answers, in retrospect I wish we’d just pointed at Will, because I’m pretty sure about half of the Chinese women in the place were ogling him and his mad language skillz.
What can you tell me about Michigan?  I practically threw my shoulder out with excitement to answer this question, asked by a future student at the University of MI-Ann Arbor, my dad’s alma mater.

And then it was over.  A brief conclusion, and the lights came back up.  We took some pictures, both with the official photographers of the event and with some of our adoring fans.  The future Wolverine found me and we chatted some more about how awesome Michigan is.

This is the kind of foreigner I like being.  Not that this happens all the time, but complete strangers asking for my picture is something I still have trouble with, because I think that’s just about my fair skin and red hair (what do I look like, a piece of meat?!).  But in situations like Sunday’s, I feel like I’m contributing something and people know more about me than just that I look different.  Maybe the radio, with its faceless voices, will turn out to be my perfect medium.  To do what with I’m not yet sure, but until I figure it out, I’m happy to keep answering questions.