As we were leaving Beijing, I told Matt that it’s high time I paid a visit to my own nation’s capital city.  I heard a lot about China’s capital being a mix of the modern and the historical, and while it’s not beautiful like Hangzhou, sights like the Forbidden City and Tian’anmen Square exposed the roots of China and its culture and its government in a way I haven’t really experienced in Hangzhou.  I realized there is a difference between traditional China and historical China; Hangzhou is definitely the former.

Much of the touring we did in Beijing was to the palaces and playgrounds of emperors, where the square-footage and minutely-detailed architecture never ceased to astonish me.  How did the common people live in the shadows of these places?

The Forbidden City.  This was the center of government and ceremony, the home of the emperor, the birthplace of culture.

The portrait of Chairman Mao Zedong that guards the entrance to the Forbidden City. 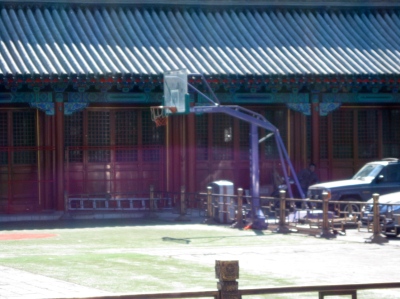 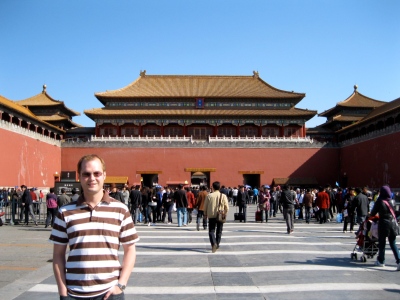 Tons of tourist groups in matching hats or shirts or bags. 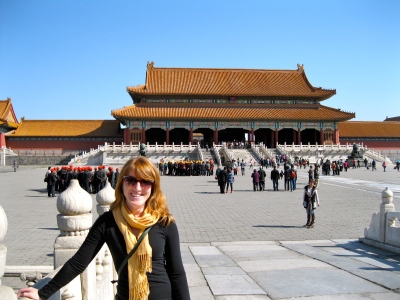 Chinese guardian lions.  This one, the female, is holding a cub.

The male holds his paw on the world. 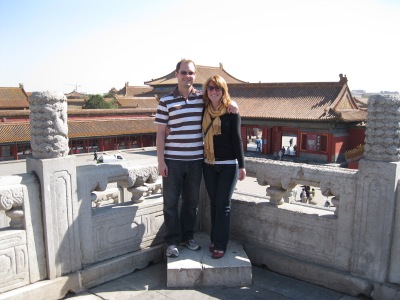 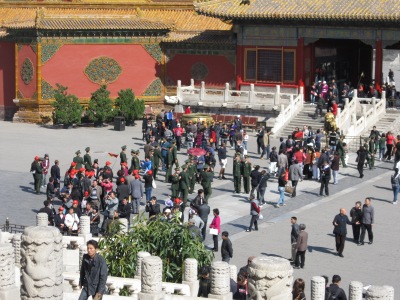 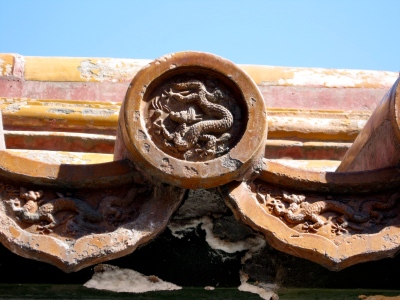 The smallest details had even smaller details of their own. 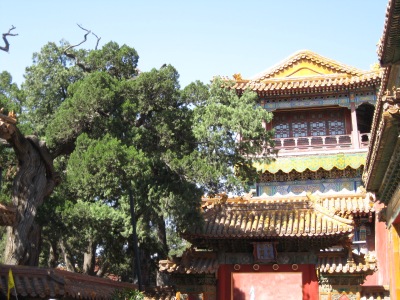 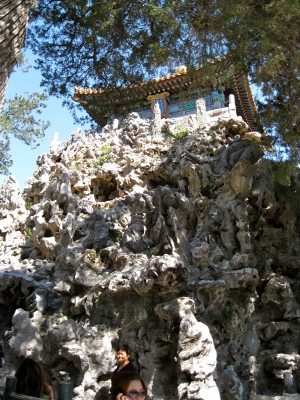 The moat surrounding FC.  Difficult to get in or out.

The next pictures I took in the bridal chambers of the empress.  We were here while the rest of the world was watching the royal wedding in the UK.  (I must have gotten some inspiration here for my own wedding dress, because I recently found one in Shanghai.  It’s being made for me there and will be ready in a month.  Can’t. Wait.) 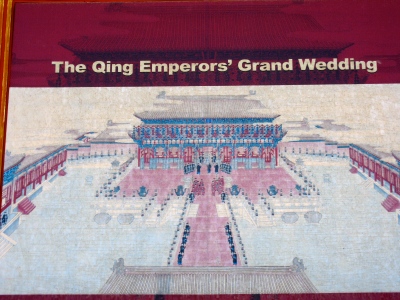 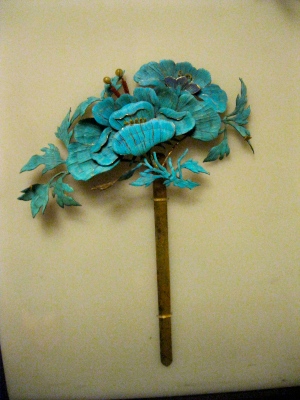 My favorite of the hairpins.

As we left, Matt’s iPhone told us there was some sort of a park-ish space next door, and we thought we’d walk through.  It turned out to be a gigantic walled compound, the same size as the imposing Forbidden City.  After a little more research (i.e. observing the armed guards at every entrance), we realized this was the current center of government in Beijing.  Matt observed that they hadn’t moved very far since leaving the Forbidden City.

Amanda and I outside of the Forbidden City.

The Summer Palace.  This was a playground for the royal family.  Not as stately as the Forbidden City, but still impressive in size.  The palace itself overlooks a lake, and the grounds are home to a few temples.  A lovely place to play. 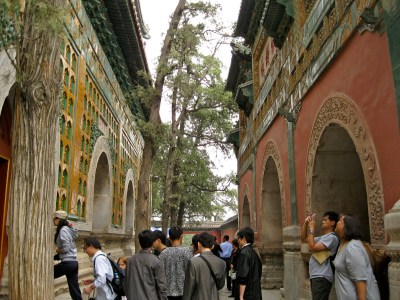 Temples on either side.  No pics allowed inside. 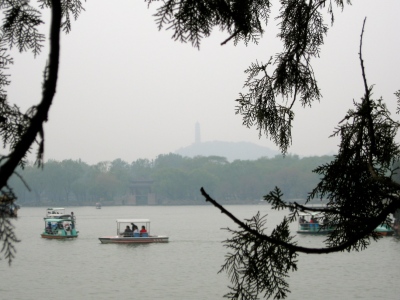 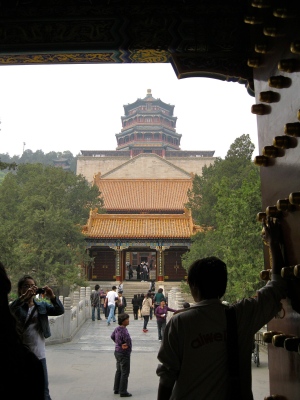 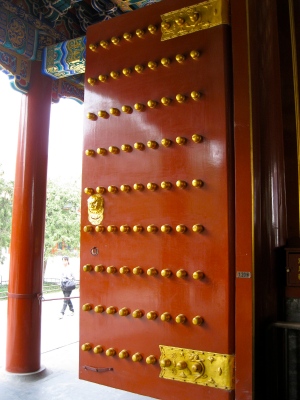 Jingshan Park.  Jingshan Park is a former imperial garden that lies immediately north of the Forbidden City, and it offers a terrific view of Beijing because of its five man-made peaks.  (Literally, made only with man and animal power during the Ming dynasty.)  Like some of the gardens we saw in Suzhou, this  was full of color and immaculately tended to.  The peony roses were in full bloom; a sign told us 20,000 of these bushes lived on the grounds. 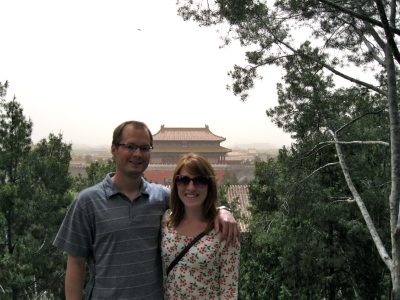 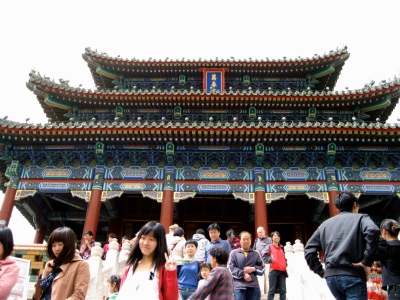 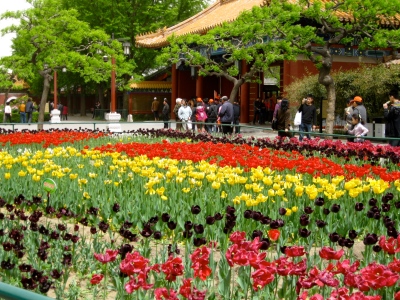 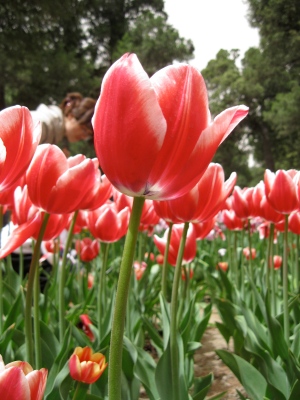 Tian’anmen Square.  I’ve saved this one for last because it was the only place I went to twice: once on the afternoon following our trip to the Forbidden City, and once at 5am to see the flag-raising ceremony. Aside from the Great Wall, it was also the only place that made me sort of…emotional.

There was security to get in- the whole square is surrounded by a low, white, wrought-iron fence- and there seemed to always be a line.  It’s the largest square in the world, marks the beginning of the People’s Republic of China, and like the entrance to the Forbidden City, it’s watched over by a gigantic portrait.  I can’t find exactly who this person is- many websites say that it’s also Mao, but I don’t think this man looks like him.  In any case, when you stand between the two sites, the men face each other and it’s a bit unnerving.  While there is a Monument to the People’s Heroes in the middle of the square, there is nothing resembling a memorial here.  It is all celebration. 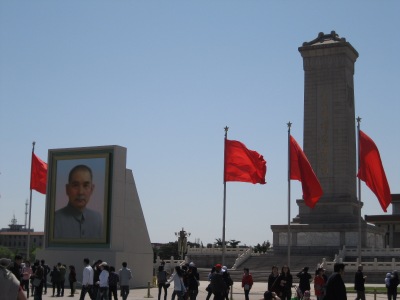 Monument to the People’s Heroes in the background.

I mentioned the flag-raising ceremony.  If you ever travel to Beijing, I recommend waking early for this. Every morning at sunrise, a military band accompanies the raising of the Chinese flag by playing the national anthem (which is called “Song of the Advancing Volunteer Army”).  It’s free to the public, but because sunrise was at 5:13am when we were in Beijing, I (foolishly) did not think it would be all that crowded.  Our hotel was about a 7-minute walk from Tian’anmen Square, so I figured I’d wake up around 4:40am on Saturday morning, grab a banana, and head down.  (Sidebar: there is also a daily flag-lowering ceremony.)

I wish I could say that I saw a beautiful sunrise that day, but it was a pretty grey morning.  I strolled along Chang’an Jie and was startled to see street vendors already lining the curbs, selling replica Chinese flags, and was further startled when one by one, Chinese people started to run past me.  We weren’t that far from the square, so I couldn’t figure out the need to run until I got a little closer and saw the thousands and thousands of people trying to get through security.  That’s when I started running too.

Trisha and I often attempt to do new things here with the confidence that comes from being able to play the Dumb Foreigner Card.  It allows us to not feel stupid when we try to eat at a restaurant that has no picture menu or when we need our chullets trimmed.  As I approached the security checkpoint, I could see that before I even made it to that line, I’d have to get through the corral on the other side of the street just to cross over.  So I pretended that I didn’t know the rules of being in line and just cut in front of a bunch of tour groups.  When the light changed and the attending police officer motioned for us to go, I sprinted in front of everyone and cut in line again at security.  I made it into the square with a few minutes to spare.

Because of the massive crowd, I could only hear the band and see the flag as it climbed its pole, but I was struck by the importance of the ceremony.  We were standing in this place that for Westerners represents something different than national pride and unity.  And yet, the many thousands of people around me had woken up in the dark to be present in that moment, to watch their country’s flag fly above their heads.  As I am so often here, I was struck by how much I don’t know about governance. Everyone around me was full of pride.  I felt lucky to be a witness. 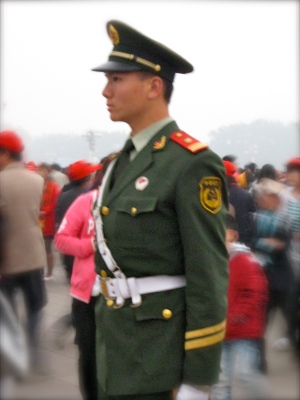 One more note about Tian’anmen Square.  If you’re willing to get up early, stand in a ridiculously long line, give up your cell phone and your camera, and agree not to talk, you might have a shot at seeing Chairman Mao’s preserved body.  He’s lifted above ground for about 4 hours every morning (while it’s still relatively cool outside) before returning to his underground mausoleum.  We tried to view the body the day we left, Labor Day here in China, but the crowds were literally thick enough to prevent pedestrian traffic from getting across the street, and after a near bout of claustrophobic panic, we gave up.  I’m okay with that.