When we left Wli, we knew we were in for a day full of travel. A tro-tro to Hohoe, another from Hohoe to Accra. Then perhaps a taxi to the airport, where we needed to stop to buy our domestic flight tickets to Tamale. Then a taxi to Kenashie Station, where’d we’d get another tro-tro to our final destination: Kokrobite, Land of Rastas, marijuana, and- most appealing to us- The Beach.

Wli was so cool on Friday morning, the morning we left. We were still feeling the after-effects of the rain that had come down the afternoon before. We found a tro-tro almost as soon as we left the hotel’s compound- it was just the two of us at first, so the driver circled around the tiny town, looking for other passengers. We didn’t find any, but we did find a man who needed a bunch of cassava roots and charcoal pieces wrapped in palm fronds transported to the market in Hohoe. Some of these big sacks we picked up in Wli, and some we picked up from a woman standing by the side of the road somewhere between Wli and Hohoe. The mate insisted that we sit in the front two seats (there is a front middle seat in all tro-tros), and for the first time, I had a clear view of what was coming in the road.

I don’t think I ever really understood the secret language between tro drivers, but by the time we left, I did trust that one existed. In Ghana, black top stretches punctuate the roads in dots and dashes; many times, the paved way just runs out, like the end of a lava flow. And then the drivers slow down and swerve and “ease” the rusty tro-tro and its 17 passengers down onto the dirt road. The massive pot holes create a problem, too, but for this the drivers have also found a solution. They snake around these washed-out holes, which wouldn’t be a huge deal if we were on a one-way. Buuuut we never were. Because there are other tro-tros coming at you as you weave around these potholes, and they are weaving too, the road looks like a bumper cars arena. Except real. But the drivers honk their horns or flash their lights in a friendly way to say, “Here I am. I see you, too, are here!” and somehow we made everywhere we went safely.

Safely, but not always comfortably. At Hohoe, we left with a fuller tro-tro than usual: three in the front, three just behind them, four behind them, three in our row, and five in the back, so 18 in all. Three of our passengers were small kids. The boy in front of us was probably four and the two behind us were maybe seven (a girl) and one (a boy). At first I thought, oh cute, kids, plus we’ll all have a little more room. But then I realized none of them counted as passengers. We were still going to fill the tro-tro with 15 adults. The kids were just extra.

This ride was going to be the longest, because we had to travel back down past Somanya to get to Accra. We expected to spend about five hours on this tro. And to begin with, that seemed okay. The air was still tepid and we had a good steady breeze. The lack of traffic let us go as fast as we could, though with the quality of road, we would speed up for 30 seconds, a minute if we were lucky, and then slow way down for whatever obstacle was in the way. Matt and I had both taken Dramamine, but the kid in front of us did not look so good.

Meanwhile, behind us, the boy and girl started coughing this wet, hacking, chest-rattling cough. Ugh. I popped an Airborne and tried to ignore it.

And then of course, the boy in front of us started puking. I couldn’t blame him. Those bumps and swerves were brutal. But I really had to concentrate on anything but him for my own sanity. He must have thrown up into a bag or something- I didn’t see it- but it ended up smeared all over his face. His mother whipped his shirt off and shook him, maybe to see if he was done? He turned to look at me, mid-shake, and I felt bad for him, so I smiled. He scowled. Fine. Have a nice ride, Puke Face.

Outside the air had gotten much warmer. There was still a breeze, but it was like a breeze that might come out of your open oven door. My Dramamine started to kick in, and my head got very heavy. Matt tried to wake me, but I missed the family of red-bottomed baboons on the side of the road! I tried to force myself to stay awake, but it was so hard. And so, so hot.

I did, however, wake up when I heard the boy behind us throwing up. “What’s happening?” I asked Matt groggily. “That baby is spitting up, a lot.” Good lord. I had pretty much had it, especially when boy in front puked AGAIN. And keep in mind that the wet cough rang in my ears during the entire trip. I knew a Fan Ice would make me feel better. As we got closer to the city, the vendors at each stop or stoplight grew in number, but the only time we were close enough to a man selling my favorite sweet treat, we made it through the toll just a few seconds too quickly for the transaction to happen.

The traffic got really heavy as we approached Accra. Our driver kept trying short-cuts: one of them took us off the main road, zigzagging through parking lots of shadier and shadier-looking buildings, then through a cluster of maybe 15 cows, and eventually to a place so deserted and desolate I was sure he was planning to sell us. But then we popped out onto the road again- six or seven cars behind the green truck we’d originally been following. But you’ve got to give him credit for trying, I guess. Also for not selling us.

We needed to get off near the airport, so Matt passed a message up to the driver. He was able to let us off just a few blocks away, to our great relief. We’d been in the tro-tro for four hours, and it had only cost us 11 cedis each, or about five bucks. Not bad.

Accra was SO HOT. Walking the half-mile to the airport with my pack felt so hard, even though it was a relief to move my legs. We crossed two roundabouts and dragged ourselves into the first terminal we saw. A.C. Oh my god. I can’t even tell you how amazing that felt. We just stood for a few seconds, feeling human again.

But we were there on business. It turned out that we were at the international terminal and we needed to go to the domestic terminal to buy our tickets to Tamale. More outside walking. Once there, we stood “in line” for a while (lines in Ghana are a lot like lines in China) before the agents at both airlines told us they accepted only cash. We didn’t have enough on us, so we then had to trudge outside down to arrivals, where the only cash machines were. One was under repair, but luckily its partner wasn’t. Matt exchanged our American dollars and I got some cedis from the ATM. And then we walked, slowly and preserving energy, back to the first terminal. Prepared this time. We bought our tickets- 600 cedis total, which is a huge wad of cash- and found a taxi.

Because our tickets were less than we expected, and because we were so hot and any extra effort expended in such heat felt exponentially more difficult, Matt asked the cab driver how much he’d charge to bring us to Kokrobite directly. “60 cedis,” he answered. Sold!

We hefted ourselves and our bags in. As we neared the first roundabout, Matt said, “And if we can, we want to stop for Fan Ice on the road.” I smiled at him. My thoughtful husband.

“Oh!” said the driver. “Let’s go to the petrol station.” Instead of getting on the highway, he turned around and found some frontage road. I was annoyed. There were plenty of opportunities to get Fan Ice on the road, ones that wouldn’t have required us to get out of our comfortable roomy seats, and I just wanted to get going. I was tired of traveling.

We pulled into the gas station and Matt said, “I’ll go in- small small,” meaning he’d be in and out. In retrospect, I would’ve been far more comfortable going in too, but I was too hot to think. The driver parked and said, “Oh, I’ll go in too!” and jumped out. So then I was alone in the back seat of a running car with our bags and lots of valuable things, and because I’m incredibly neurotic and grew up hearing about Jacob Wetterling, I was suddenly nervous. I tried to focus on things in the car (the driver’s “Legalize Marijuana” sticker) and on remembering the signs I’d seen on the road: “Merciful God Electronics” and “Jesus Satisfies Stationery Store” and “Are you having waist pains and sexual weakness?” followed by a number, which I can only imagine would lead you either to a doctor or an abstinence-only priest. But I couldn’t relax.

Five excruciating minutes later, the driver came back with a water. “Is my husband coming?” I asked. He laughed and said, “Oh yes, right behind me.” Matt did come out a minute or two later, thankfully, with the ubiquitous black bag everything you buy in Ghana comes in. When he got in the car, he handed me a frozen Snicker’s ice cream bar- not the Fan Ice I was hoping for. I know I had a bitch face on and was accidentally salty to Matt because I was so annoyed with the driver. This is no excuse, but I was extremely hungry and so hot, which is a hard combination for me. Anyway, we were finally underway, and the driver had a kickin’ AC system, which he turned on for us for an extra 20 cedis. Also, it turned out that the Snickers bar was delicious. I felt much calmer.

It took us just under an hour to reach the beach. The palm trees grew taller there and the ocean was a salty, cloudy light blue. The waves were strong. Low wooden boats netted fish off the shore a little ways. There were dreadlocks and white people everywhere. Sometimes both at once. I could tell we were in for a good time. 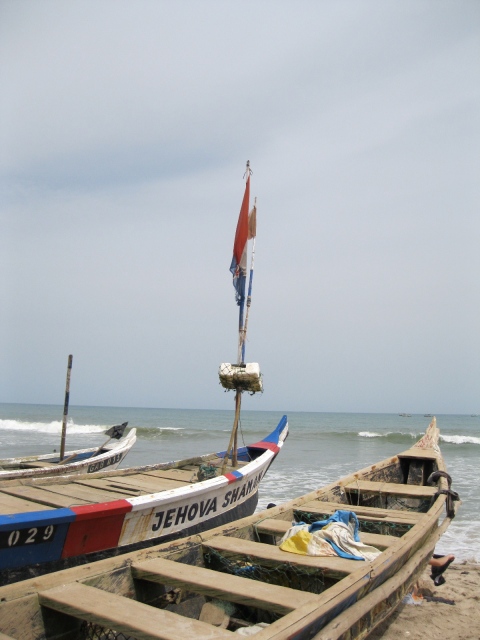