Ear plugs or not, we both heard the call to prayer incredibly early the next morning- 4 or 4:30am. It sounded so…eerie. And holy. A man’s voice over a scratchy loudspeaker, rhythmic and sing-songy. I popped one plug out to listen, and then I fell asleep until 6. When I woke up, I could see through the window screens that Matt was already up. He’d collected a few buckets of water from a stone cistern for us to do laundry.

There was a lot of activity on the beach that day. Sunbathers, swimmers, shoppers. A neighboring resort was pumping out endless thumps of electronica. (No bueno for the pensive thinker, but that isn’t why a traveler would come to Kokrobite.) The Ghanaian kids loved the beat and were dancing in pairs or by themselves on the fishing boats that docked firmly on shore. Three riders on horses first walked, then trotted by. Young Ghanaian men tipped sideways into the crashing waves so casually that they seemed to hardly move their bodies. Old white men walked hand-in-hand with questionably young Ghanaian women. 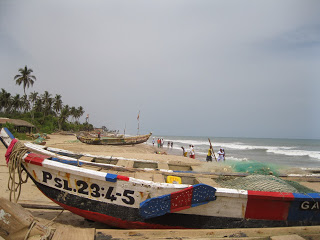 We had dinner at the Garden’s restaurant again. The place next door, The Black Stone, where we’d hoped to get fufu and banku, had closed its chop bar. While some places were comfortingly, astonishingly familiar to Matt, a lot has changed since he left in 2007. 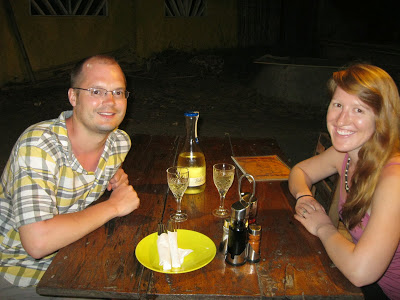 In fact, we talked about just that with Caye’s husband, Franco, on our way to dinner. When Matt mentioned he was a Peace Corps volunteer, Franco said that they used to have many PCVs as regular customers. Now it seems that they are choosing beach locales other than Kokrobite. We all shrugged. Who knows why? Franco said he’d heard that the Peace Corps office in Accra had put up a notice declaring Kokrobite unsafe. After we sat down at our table, Matt told me that was likely a move to discourage drug use- namely smoking pot- among the volunteers. A crackdown had begun just as Matt’s time as a PCV was ending.

We talked about other things with Franco, too. He told us that the whole family had returned just a few days earlier from a vacation in India. They’d been there for two months, he said. Two months! I was instantly envious, even more so when he told us that after he and Caye built up their quaint resort, they then took two years off to travel the world while her sister watched and ran the place. What a life!

We passed the next day in much comfort- lots of pool and reading time and lights out for only a short hour or two in the middle of the night, which was cooler than the previous night. I pulled out my earplugs at some point because I very distinctly heard the call to prayer. It was clear and musical and quite beautiful- more so than on the previous morning.

We awoke before 6- just in time for another lights out- and by 6:25 we were ready to leave the beach. We walked through the non-touristy part of Kokrobite, through some of the poorest conditions I’ve seen so far here. A rivulet of dirty water- laundry? waste?- ran down the middle of the dirt road and small chickens drank from it. Lots of heavy heat in the air. On the corner, we found a taxi who would take us to Barrier Road, to find a tro-tro that would take us to Cape Coast.