We took a taxi the relatively short distance to our next lodging, the Hans Cottage Botel. Easily the most bizarre place we stayed, and why it is called a Botel, I still don’t know.

The Botel is quite a bit bigger than the other places we’d been, which have between 10 and 15 rooms. This place has 59! It also has an open-air restaurant that is situated in the middle of…wait for it… a crocodile pond. The pond has an island that provides shelter for lots of mud weavers and these white stork-like birds. A walkway around the perimeter of the pond allows for closer croc views. 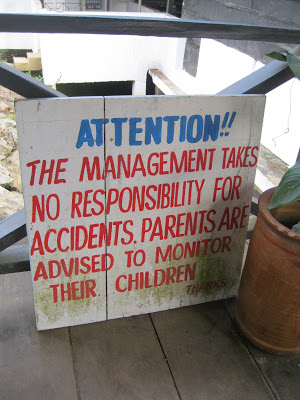 Even though it was sort of a strange place (for example, the shower’s water heater- which we did not use- had exposed wiring on the shower head, and our “king-sized” bed was really two twins pushed together), we got to spend our first night in many in blessed air conditioning. Ah-mazing. We both slept well.

The next morning, we got up early to head to Kakum National Forest to hike in the canopy of the rainforest. The canopy walk is a USAID-funded project, designed by two Canadians and six Ghanaians, who are still there to maintain it.

We joined a group of six Germans- a couple, and a family with two daughters. I don’t think they knew each other. The hike to the first platform was surprisingly steep. Just as I was thinking about the Wli hike, Matt said, “Argh, I’m having flashbacks to Wli!” Great minds.

As we approached the first platform, our guide reminded us that there are seven bridges, separated by viewing platforms. The structure is built on a steep incline, into a valley, so you walk out and back in a semicircle, not retracing your steps. We’d start out 11 meters off the ground and hike as high as 40 meters. 40 meters!!! I was so nervous.

But the view was, simply, incredible. We were next to the highest parts of trees, places on trees we never thought we’d see. Secret places. We could see the forest for miles and miles. Hear birds for miles. Incredible. 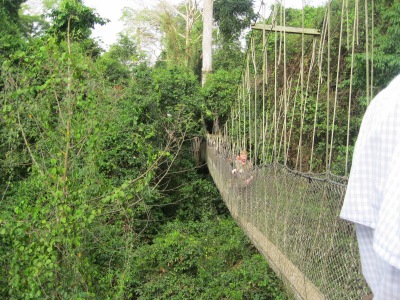 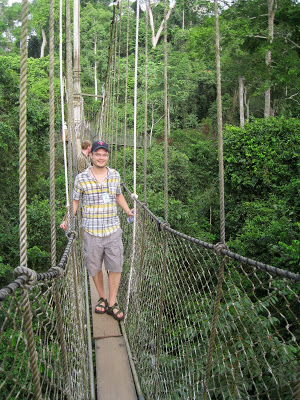 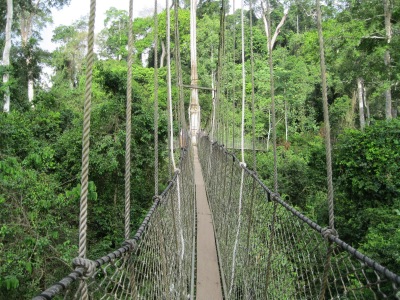 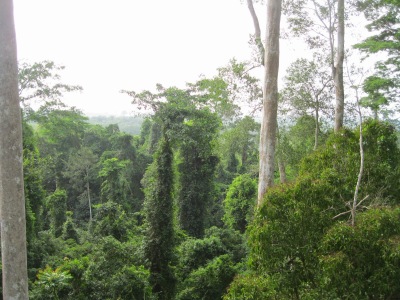 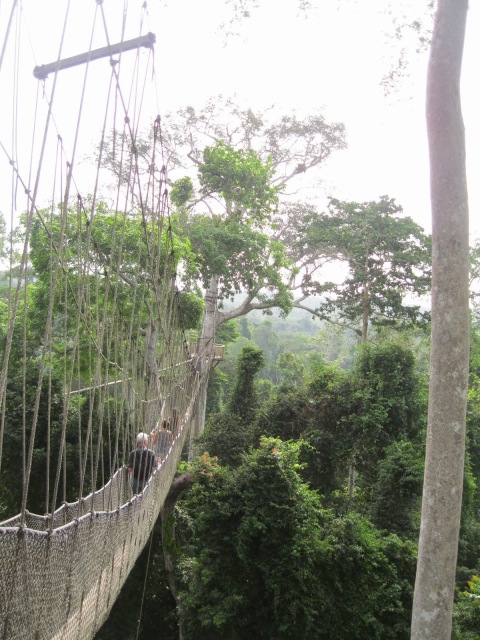 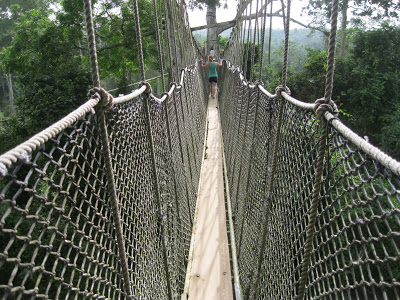 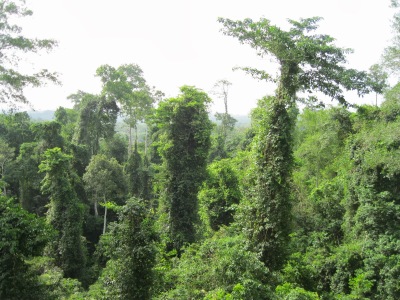 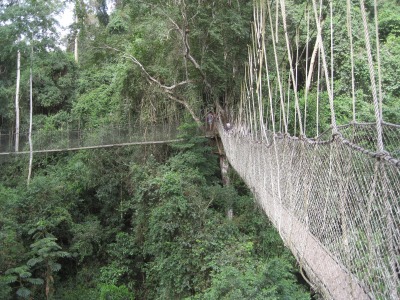 And also frightening! Out of structural necessity, the whole thing sways and creaks and snaps, including the platforms. I could only force myself to look down so often because we were at such dizzying, flexible heights. I kept having to remind myself that we’d been in far greater danger in the tro-tro on the way there, the one whose driver piled in several more people than he was supposed to (the only tro-tro driver I felt was truly reckless) while the mate straddled the window and lap of the nearest passenger. Although since we were going to take a tro-tro back to the Botel, this wasn’t exactly comforting.

Though we didn’t see any of the park’s 24 forest elephants (one rarely does), this was still a must-experience if you’re ever in the neighborhood. The Botel? Sure. Why not?