A few months after Oscar was born, Matt went for his annual physical, and unfortunately but not surprisingly, his already-high cholesterol numbers from last year were higher this year. He has never been overweight or a smoker, and he runs several times a week, but both of his (thin, active) parents have had to manage high cholesterol since they were around his age. It’s just in his genes.

Not ready to start a daily, interminable medication, Matt decided to manage those lifestyle factors that were in his control- exercise and diet- and see what happened.

I’ve preferred to eat vegetarian since training for the last marathon I ran (ultra-marathon champion and Minnesotan Scott Jurek’s book, Eat and Run, largely influenced this shift) and because I do most of the cooking, Matt has been a part-time vegetarian for the last three years. But we ate lots of eggs and lots of dairy. Cheese, mostly. At any given time, you could find shredded cheese, string cheese, snacky little cheese wheels, cheese curds, and sliced cheese in our deli drawer. All together. All well within their expiration dates because we did not let that shit go bad.

But health is not to be taken lightly or for granted, especially now that we have a kid. And Matt’s body needed some attention to stay healthy. Changing your diet is hard, and I wanted to support Matt, just like he’d supported me. In January, we became veganish.

I say veganish because though we are both animal lovers and know that meat production practices in this country are largely abominable, this wasn’t about cruelty and it wasn’t about absolutes. It was about health. (The sustainability was appealing, too.) We cut out all dairy and eggs from our at-home meals and most dairy and eggs from our meals out. What we were really after was lowering our saturated fat and cholesterol intake, and following a vegan diet is one way to do that while still getting the protein you need and upping your vegetable intake.

The timing was right for us to feel like this was a doable shift. First, we had the impetus: Matt’s blood test with the much-too-high LDL level of 171. Second, we had the resources: each other, family and friends who preferred vegan diets, an internet full of food blogs, and what has become my Kitchen Bible, Angela Liddon’s fantastic cookbook, Oh She Glows.

I think the phrase “dietary restrictions” implies that, if you apply a label to the way you eat, you can only eat foods from a very narrow list, and that, as a vegan, the list probably only includes different kinds of lettuce. But I can say with complete sincerity that my relationship with food and especially cooking has never been more exciting or fulfilling than it is now that we’re mostly-vegans.

Easily 90% of my culinary education, as it pertains to vegan cooking, comes from Oh She Glows.

The author, Angela Liddon, presents dozens of vegan recipes that are diverse, doable, and delicious. I’ve never been a big cookbook person, but this one is so different from any that I’ve used in the past, and it’s been so much better, results-wise, than any recipe I’ve pulled from the internet. Two reasons for this: one, Liddon must test the hell out of her recipes, because I’ve made at least one-third of them by this point, and literally every single one of them has been really tasty and satisfying. I trust her ingredients- which are affordable and easy to find and pronounce- and instructions completely.

Two, she reuses ingredients in multiple recipes, in new ways. I’ve never liked buying, for example, a whole jar of tahini to use just a few tablespoons in a particular recipe. What am I going to do with the other 14 ounces? (In the past: throw it away after I find it, months later, languishing in the hinterlands of our refrigerator.) This is no longer an issue; I’ve never had a better handle on the inventory of our pantry and fridge, and I’ve cut way down on food waste in our house.

Earlier I said that changing your diet is hard, but I have to tell you, this change wasn’t actually that difficult. I stopped buying dairy, and I stopped wanting dairy. The meals we’ve been eating have left us both completely- and to be honest, surprisingly- satisfied and eager to try more. It doesn’t feel like anything is missing or that we’re depriving ourselves of anything. Really, the opposite is true. We used to throw cheese into and onto everything; now, I’m tasting flavors and a freshness that were previously masked by fat and salt. I feel like I’m just discovering how good food can be.

And my body is working better than ever. I have lots of energy. I don’t feel weighted down or sluggish or a little sick after eating anymore. A combination of good genes, breastfeeding, and Blooma barre brought me back to my pre-pregnancy weight within a couple of months of Oscar’s birth, but since becoming veganish, I’ve lost a few other pounds that I didn’t need.

So, I love the food I am eating, I love how I feel, and I love how I look. How’s Matt doing? He’s also trimmed up, and he’s enthusiastically eating all of the vegan cooking coming out of our kitchen. In March, just ten weeks after we started this whole vegan-at-home diet, we got the big news we had been hoping for: Matt’s bad cholesterol levels plummeted from 171 to 105. 105! In ten weeks. No daily pills needed.

I believed it before, but we’re living it now: food is medicine. 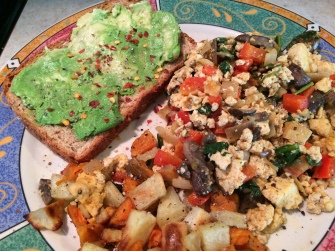 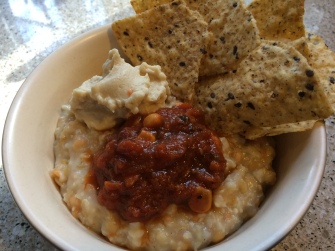 Tex-mex casserole. One of Matt’s faves! 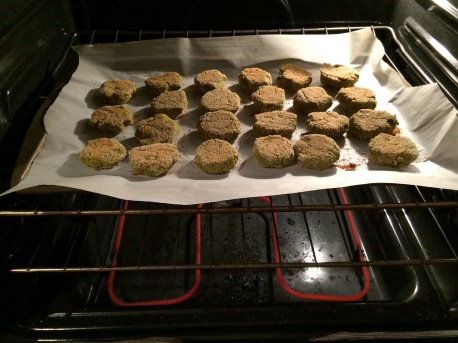 Super yummy vegan dish we discovered. Lots of good cooking in 2015 so far!

Delicious food at The Ecopolitan, the raw vegan restaurant in Uptown.

So, we’re kind of vegans now! I mean, when Matt travels to rural South America for work, there aren’t many vegetarian options (let alone vegan), and if, say, my grandparents make me dinner and there’s chicken in it, I’m going to eat it because I love my grandparents and a little bit of chicken isn’t going to kill me.

But. Eating whole, plant-based foods has truly improved the quality of our lives, and if all goes according to plan, the length of them, too.