Once again, this post will be long on pictures, short on text.  A walking tour of my new neighborhood, which- no offense, St. Paul- is a bit more exciting than Argyle Street back home.

Everyone here seems to dry their clothing by hanging them up outside.  I’m not sure how effective this, given that it’s sort of damp and only about 40 degrees, but it must work eventually.

A bus!  I know, very exciting.  I wish I had audio to accompany this picture, because loudspeakers on the buses announce (in Chinese), “There are pedestrians around! Be careful!” 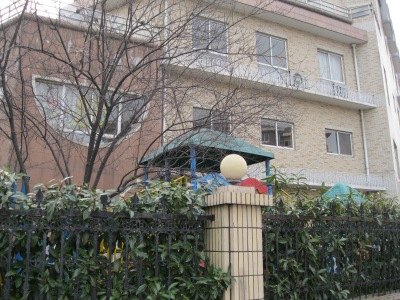 This is a kindergarten that is very near my apartment.  I can’t wait until school starts again and I can see the kids playing outside (I promise not to loiter like some creeper, but I might take some pictures). 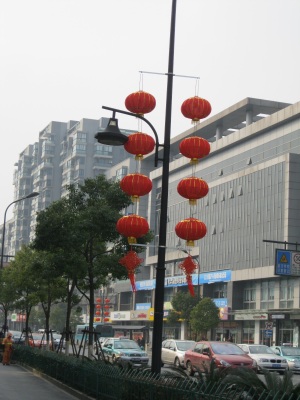 These red lamp/decorations are hanging all over the city.  I think they’re just for the New Year celebration, but maybe they’re up all the time.  I hope so.  They are very pretty. 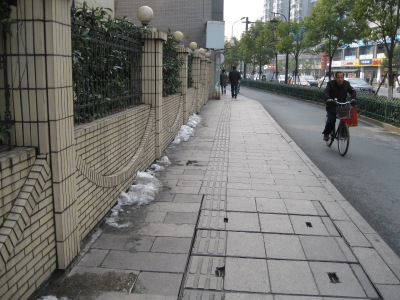 This is how much snow is on the ground here, and it’s very odd that there is snow at all on the ground.  I think it looks especially strange given how green the trees are. 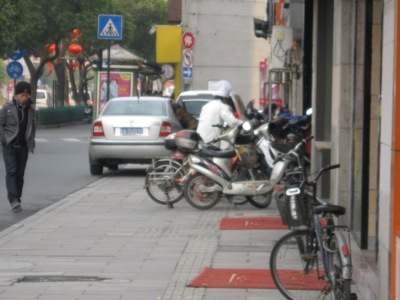 People just park cars on the sidewalks.  Some parking lots are even built on expanded sidewalks.  And there are bikes everywhere.  Lots of people bike.

A gate to an expensive apartment complex.  I think these decorations are just for the New Year.

A brave police officer!  I’d never be able to stand so confidently in an intersection anywhere, but particularly here, where road rules seem more like silly suggestions.

Some bamboo shoots and more bikes.

Ah!  A bookstore!  I found some nice solace in here, although none of the books were in English.  I did pick up a copy of Walden in Chinese, for DW. 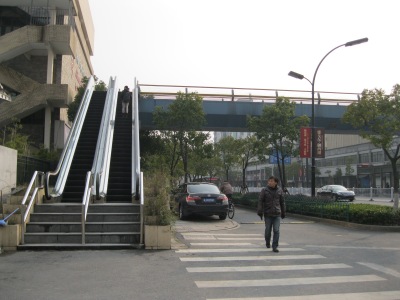 We have foot bridges in St. Paul too, but I’m pretty sure I’ve never seen an escalator as a means to get to one. 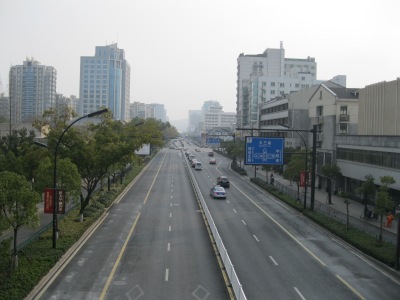 The view from the footbridge. 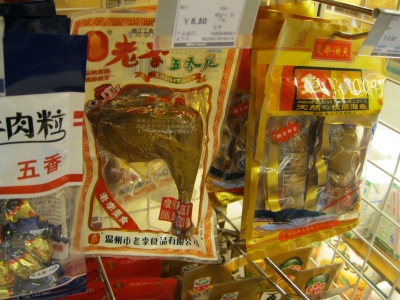 I found this…leg (question mark?) of some sort of fowl packaged in the candy section of a convenience store close to my apartment. Yum. 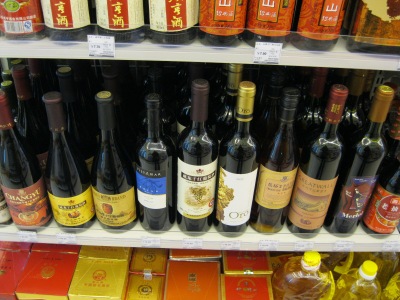 Some of the New Year’s decorations are very comforting.

This is the canal next to my apartment building.

My bank!  It’s literally the closest building to my apartment.  Quite convenient.

This is the apartment complex.  I live in the third building back, on the second floor.

A large fireworks display.  People love to shoot off fireworks to celebrate New Year’s; in fact, they already started last night.  It was fun to listen to, but the view from my building is obscured by other buildings.  I’ll see plenty of fireworks on the night of Feb. 2nd, though.

There you have it!  I’m sure I’ll add more pictures of the neighborhood later, as there is so much to see.  I have a sneaking suspicion that I live in a cool part of the city.  Today I’m going to expand a bit and try to find West Lake, which is about 2km away.  I’m really excited to see the lake; it’s what the city is known for.  Bao says it can’t compare to Lake Minnetonka, but from the pictures I’ve already seen, I think he’s too humble.  I’ll let you know!