Last night, Bao, Trisha (aka T$- pronounced “Tee Money”), and I rolled in to Hangzhou around 7pm, had some spicy Szechuan seafod, and then let T$ crash into her first night of sleep in China.  Bao stuck around for a while, trying to get the internet sharing on my Mac to cooperate with Trisha’s PC and helping to organize our cell phone plans, and it occurred to me that I’ve not really described Bao’s role in my (our) transition to life in Hangzhou.  And he deserves some mad props.

Bao is in charge of the 5 foreign English teachers at HFLS: me, T$, some guy named Eric, some other guy, and Sabrina.  Sidebar: I can’t believe I haven’t mentioned this yet, but last week, I got word from Sabrina that another spot had opened up at HFLS, and she was feeling well enough to take it.  How great is that?!  When the position became available, Bao thought of her immediately, and now all 3 interested teachers from Minnesota will get to enjoy a semester in Hangzhou.  Very cool. Very kismet.  Anyway, in addition to teaching his own classes, Bao is in charge of helping us through the interview and application process (both with the school and with the Chinese government), and he also serves as a one-man welcoming crew, though I don’t think this is in his official job description.  Here is the growing list of things that Bao has done for me since I’ve been here:

1) Picked me up in Shanghai, a 6-7 hour roundtrip for him.  This is not something he has to do.  I could have taken the train.
2) Arranged a welcome dinner with DW’s family.
3) Got me my first milk tea and walked with me through 2 miles of my new neighborhood, pointing out essential stores and good restaurants.
4) Hooked up my internet and gave me the password to his VPN so I can access blocked sites.  Like this blog.
5) Put both me and T$ on his family’s cell phone plan, so we can call and text him and each other for free. (Ha, and his wife, his mother, his uncle, etc.)
6) Took me to lunch at a restaurant near school.  Unbelievable food. 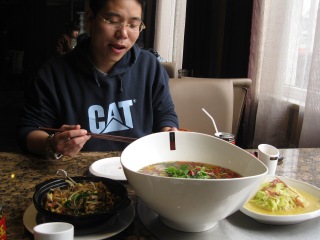 7) The next day, made me lunch and taught me how to make two Chinese dishes.
8) Taught me 3 new functions that my Mac can do.
9) Made sure I had plans for New Year’s Eve.
10) Sent lots of texts when I first got here to make sure I wasn’t lonely.
11) Drove me through the nature preserve near the school because I said I want to go there once the weather warms up.
12) Made me tea from a nut that’s supposed to help soothe throat aches.
13) Showed me a website to stream American TV shows.
14) Picked me up and drove me to school so I can take a look at the offices and classrooms and grounds.

And much more that I’m not immediately remembering, so since I’m thinking about school, I’ll share some pictures with you of the classrooms and teachers’ dormitories. 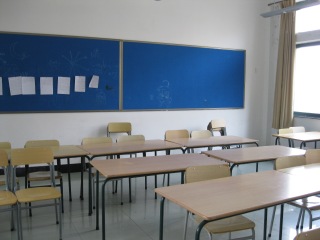 A “small” classroom.  This will fit about 25 students, which is how many the foreign teachers can expect in a class. 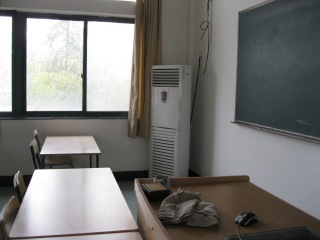 The heater/air conditioner is in the corner.

A real chalkboard!  It’s been a while since I’ve used one of these.  The computer is under glass on the desk.

The hallways are all open to the air.  It reminds me of schools in warm climates, like CA.

A courtyard.  There are several of these on campus, and 5 separate ponds- with fish!

A “large” classroom.  Up to 50 students will study in one of these classrooms.  The bigger classes are left to the Chinese teachers. 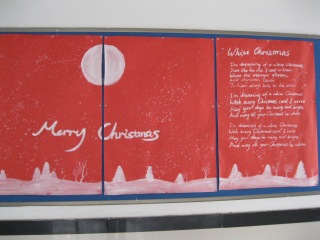 A bulletin board still bearing the decorations of pre-Spring Festival festivities.

Though T$ and I are living in the apartment in the city, Bao gave us a room on campus in case we ever wanted to spend the night at school (as he did, for example, when Hangzhou experienced a big snowstorm earlier this year).  I chose this room because the teacher before had covered the walls in post-its with individual Chinese characters, their pinying counterparts, and their English translations.  They’re color-coded by grammatical parts of speech.  We’re going to be Mandarin masters in no time. 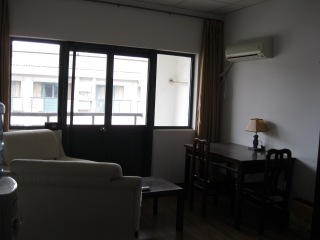 The teachers who stay on campus are given two rooms: a bedroom like the one shown above, and a sitting/dining room.  The campus-dwellers share a nice kitchen.

So Bao is yet another Chinese friend who has shown us both this unbelievably generous hospitality, and I can’t wait for the day that he takes his wife to America, and I can treat them both like the family they’re becoming.

And what have Trisha and I been up to today?  Liz and her generosity strike again!  She took us out to lunch (mmm, steamed stuffed buns) and for haircuts.  We went to a traditional barber, rather than one of the more modern salons that have popped up all over the place.  Liz said these family-owned places are disappearing, and we’re lucky to have one in our neighborhood.  The hairstylists were SO sweet and gave us their undivided attentions for a solid 90 minutes.  Liz chatted them up and read the newspaper, occasionally interjecting a funny comment or question. 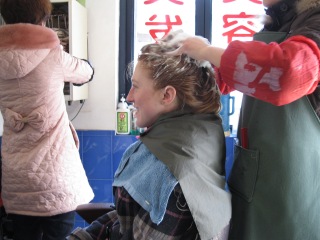 We both received the “dry wash,” which means we got scalp massages with shampoo, sitting up instead of lying back into a sink. 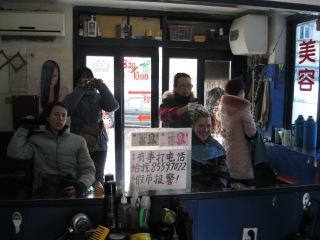 A full view of the shop. 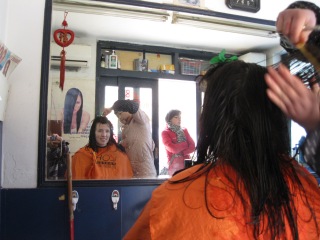 Trisha gets a trim!  We’re both very happy with our new looks.
Our next adventure is to register with the local police this afternoon, so they know who’s living in the neighborhood and where.  Gulp.  We’re going sans Liz, so hopefully we end up on the right side of the law after this… 🙂