After my internet meltdown this weekend, I could have really used a bit of sunshine.  So of course Monday turned out to be cold and very rainy, with more of the same tomorrow.  I should get used to it because the climate here is considered subtropical, which gives us a nice monsoon season.  That won’t happen until June, but the spring showers have definitely started.  I decided it’s high time for another installment of Things That Make Me Smile, so I can return to focusing on all that I love about China.
First, China has made me a bona fide Justin Bieber fan.  I’m not even a tiny bit embarrassed and no, our 11-year age difference doesn’t make this creepy at all.  One of my favorite little clothing stores plays his songs on a constant loop, and it makes me love that place even more.  He never really caught my attention in the States, but for some reason, hearing him and seeing his picture everywhere fills me with a happy nostalgia.  I’ve been singing “Baby” over and over in my head for like, 4 weeks.
All of the exit signs in China seem to hint at some kind of panic.  If you are leaving this building, they seem to say, you better be running.  Fast. 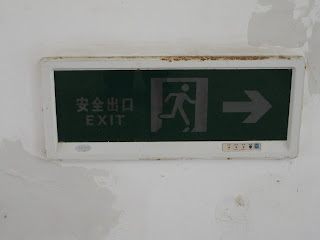 I don’t really drink milk at home, and since very few people here do, it’s easy for me to ignore my calcium intake.  So I’m trying to be vigilant about eating yogurt (spelled yoghurt here…you know, like my student, Yoghurt) to have a bit of dairy in my diet.  This isn’t too hard because it tastes a lot like yogurt at home, just a touch more liquidy.  This must explain why, whenever I buy it, the cashier gives me a bunch of straws.  I think I’m supposed to use these tiny, juice-box straws to slurp up my yogurt, but…I have spoons.  I guess it would be hard to eat yogurt if you only had chopsticks.  Sidebar: Shrimp here are served with their shells and heads and antennae still attached.  I used to struggle trying to separate the meat from everything else until another teacher told me that the shells have calcium and the heads are crunchy.  I tentatively tried one this way, ignoring its beady little eyes, and I’ve never looked back.
Last weekend, I found myself in need of floss.  I also needed a new tea mug, since I dropped mine on the floor some weeks ago and it shattered instantly against the marble.  With the relative cheapness of household items in China, I was shocked to learn that these 2 items- a stainless steel, insulated tea mug with a built-in strainer, and 50 yards of mint floss- cost the same: 35 RMB.  Pretty sure my dentist hasn’t ever given out complimentary tea mugs. 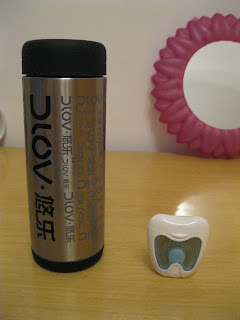 If/When you come to China, it’s good to establish a habit early on of taking tissues with you wherever you go.  These come in handy for many things, but mainly for use as napkins and as toilet paper.  Very few restaurants provide napkins and if they do, they’re in the form of those individual packets of Kleenex that people in the US stick in purses or coat pockets during cold season.  More importantly, these tissues will likely be the only available TP at any given public place.  Some Western restaurants have real toilets with real toilet paper and real soap and real hand towels, but in most places, you’ll find a squattie, sans TP, sans soap.  A few weeks ago, Trisha showed me a way to flush squatties with my foot, so I basically have this whole operation down to a hands-free science.  It might be gross, but I’m planning to do a whole blog on squatties.  If you’ve never seen or used one, it’s something you need to vicariously experience.
On most buses that I take, there are two seats about halfway back that face the rear of the bus instead of the front.  They sit higher than the rest of the seats, and they’re also about 1 ½ times the width of a normal seat.  I call them loveseats because you can cozily fit 2 people onto one- and by cozy, I mean 2 bodies squished together from hip to shoulder.  You’d think that only friends or couples or siblings would sit on such a seat, but no.  Strangers too.  I’ve found that if I’m standing near one of these seats and there’s an elderly woman occupying one side, she’ll invite me to sit down next to her.  So we’ll snuggle in and enjoy a backwards bus ride.  This has happened to me a few times now.  The woman usually says goodbye to me and I wave at her, and if you didn’t know better, you’d think we were old friends.
Now a few from school.  This first one needs a bit of explanation: Buildings 1-6 house classrooms and teacher offices, and they are all connected.  The hallways are open-air, but you can walk from one building to the next under the protection of the roof.  The picture below is of the top of one of the stairwells in Building 3.  And it just…ends.  The stairs go nowhere.  Theoretically, you should be able to travel between Building 3 and 4 by using the 4th floor, but nope.  You’ve got to go back down to the 3rd floor, down the hallway to the next stairwell, and then climb to the 4th floor.  It reminds me of something from Sideways Stories from Wayside School.  It also reminds me of something Bao told me about the student dorms: the school was built too fast, and the engineers forgot to plumb the dorms with hot water.  So the students take cold showers, or they travel down to a separate bathhouse for a hot one. 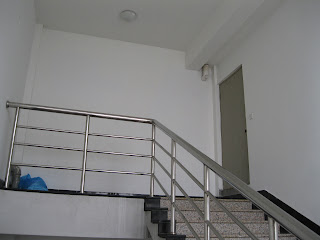 This next one will probably require you to zoom in a lot, but if you have the time to read all 10 rules for students to live by, they’re worth it. 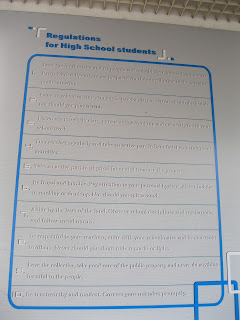 The last one isn’t actually from the HFLS campus exactly, but it’s close.  There’s this little gathering of shops and milk tea stands and a fruit market just one long block east of the school gates, and this black cocker spaniel lives there.  I’m including this picture specifically for my family and any friends who have ever met my parents’ black cocker spaniel, Oliver.  Oliver is the fussiest old grouch imaginable (but of course completely lovable); he likes his water cold and his food hand-fed.  This dog looks like his hillbilly cousin.  Despite their lifestyle differences, they seem to share a penchant for eating gravel. 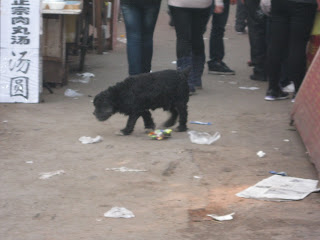 Finally, because this blog is titled “Things That Make Me Smile,” I’m including a great picture from Hainan.  (I think I’m far enough away from the experience to really relish the good memories from that trip.)  Favorite Family Mother and Father found us drinking tea and enjoying the sunset before we left the island for Hangzhou.  They took this picture and sent it to us later, so I wasn’t able to include it in the original post about Hainan.  But isn’t it great?  They are such kind people.  Whenever I’m out walking, I always keep half an eye out for them.  Maybe someday we’ll run into each other again. 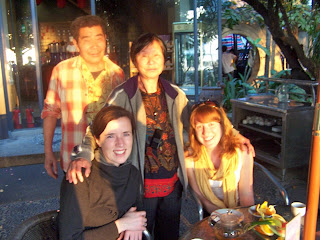 PS No word yet on the internet sitch, but BBC reported today that Google has officially blamed China for problems with Gmail.
http://www.bbc.co.uk/news/business-12802914
I’m hopeful that this attention will bring video chat- and hope against hope, maybe even my blog- back to me.  Keeping my fingers crossed.
PPS Big props to Matthew for posting these updates.  In case you were wondering, I can still get any comments you leave because those are sent to my inbox (which is forwarded to my other inbox).  I’ll just have to email any responses directly to you. J