About seeing the Great Wall, my little sister Becca, who will be traveling very soon to Tianjin to study Mandarin for the summer, recently said to me: “I think it’ll be like seeing the pyramids in Egypt (which she and my dad did last winter).  You can see pictures of it, but it’s nothing like actually being there.”

Pretty smart for a 21-year-old.  If, in your life, way leads on to way and you find yourself with an opportunity to visit the Great Wall of China, please, please, please do it.

Matt and I knew this was something we needed to include in our trip to Beijing, and happily our hotel (like most hotels in the area) provided a tour/shuttle service out to the sections of the Wall closest to Beijing.  We chose to hike along the Mutianyu section; Badaling is closer, but because of its proximity to the city, it’s also much more crowded than Mutianyu.  I got a bit nervous when our concierge told us that we’d have one stop to something called Sacred Way in the morning and lunch would be provided before the Great Wall tour, because it was starting to sound a lot like Hainan, but the alternative was to try to find transportation on our own, so we stuck with it.

And the tour began almost exactly like Hainan, except we didn’t have to be up quite as early.  Our tour guide, adorable little Ellie, wasted no time in strapping on her microphone and filling our ears with her running monologue about all things Beijing as our coach rode out of the city.

Sacred Way.  So we didn’t actually see the Ming tombs, but we did get to walk on the imperial walkway that leads to the Ming tombs. 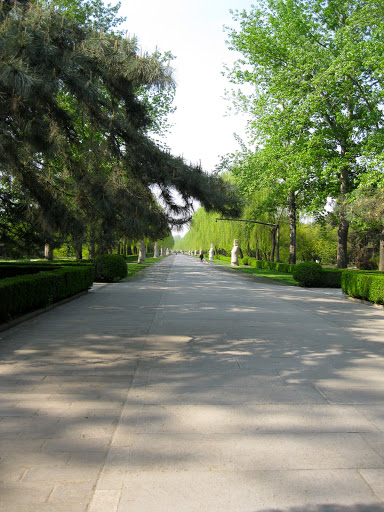 Ellie told us that when couples walk through this gate holding hands, they’ll be together forever.  Having already walked through it, Matt and I turned around to hold hands and enter properly. 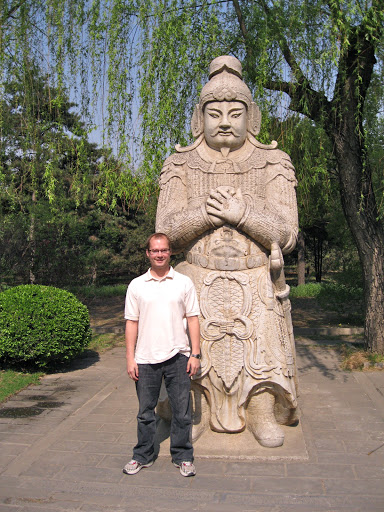 This elephant is one that also appears in a picture of Chairman Mao & Co. from 1954. 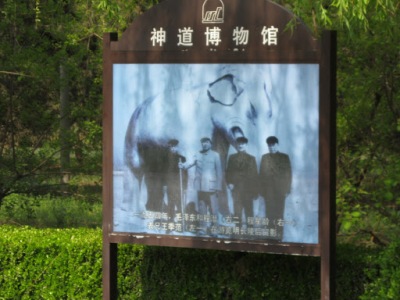 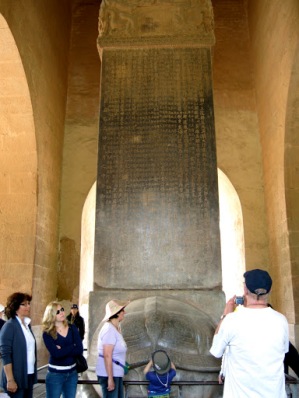 The turtle-protector of Sacred Way. 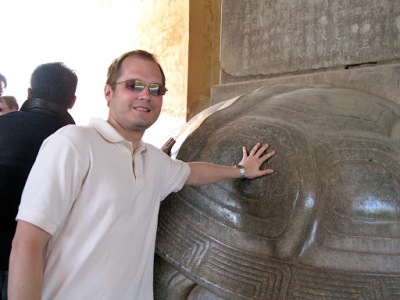 Touching his shell provides you with longevity;

…touching his head provides you with everlasting happiness.  Between the two of us, we’re set.
After Sacred Way, I started to have some serious flashbacks to Hainan.  Mostly because we were shuttled first to a factory offering traditional Chinese medicine remedies and services and next to a gigantic jade store; we were expected to make purchases at both places.  Happily, I’m an old pro at dodging these situations, so Matt and I ducked out to spend more time in the sunshine while the rest of our group listened to presentations about the health of their livers and why everyone needs a piece of jade that costs 40,000RMB.
I was interested to see what lunch would be like, having some (actually) fond memories of our time with Favorite Family on Hainan.  We sat with a family of Brits and some Californians who were in China for a friend’s wedding, and I waited excitedly for the waiters to set a whole fish or pickled tofu in front of us.  But shockingly, they served us dishes like sweet and sour pork, which basically tasted like it came from any halfway decent Chinese restaurant back home.  The only legit Chinese food was this Cantonese egg dish, and Matt and I were the only ones who touched it.  I couldn’t help making a few smug comments about how “Americanized” lunch was, but un-shockingly, I had a little of everything.
After lunch, we finally finally finally made it to the Great Wall.  The winding and climbing roads made me close my eyes and try to think of anything but Cantonese egg dishes, but when I opened them, I forgot all nausea. 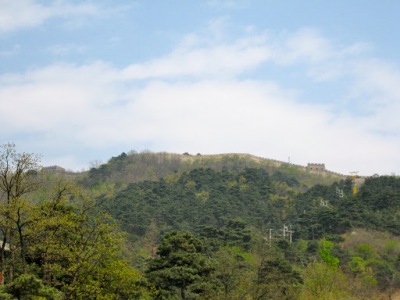 The view as we approached. 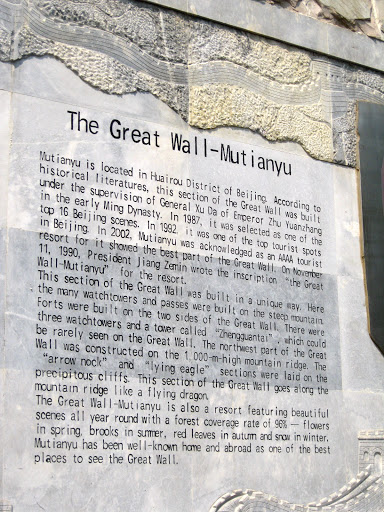 These are the most hardcore vendors I have ever met in my life.  They will physically restrain you from walking past their booths if you make eye contact with them.  Kind of intense. 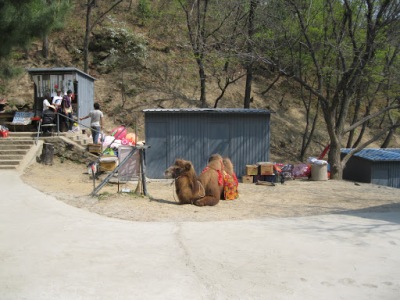 Just a camel chilling near the base of the mountain.

We took a cable car up to maximize our time hiking along the wall.

I’ll mostly let the pictures speak for themselves, but remember 3 things: 1) you can click on the pictures to make them bigger; 2) though it’s been rebuilt and rebuilt, this section of the Wall was first started in the 6th century; 3) the Wall is completely amazing, but just for some perspective, Ellie told us that Chinese people regard it as the country’s biggest tomb, since so many thousands of laborers lost their lives building it. 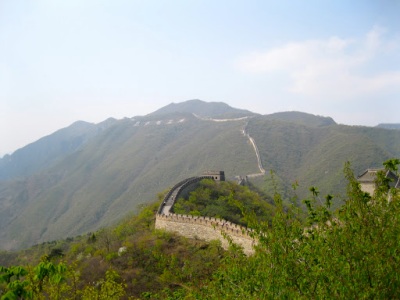 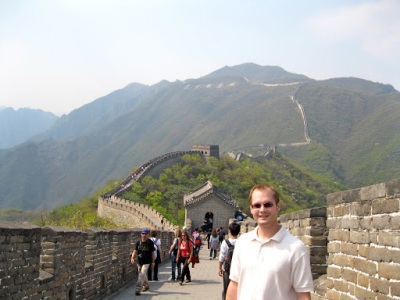 The steepest climb I have perhaps ever completed.  Look how small the people are near the top.

Some parts of the Wall were so steep that we climbed the steps like ladders. 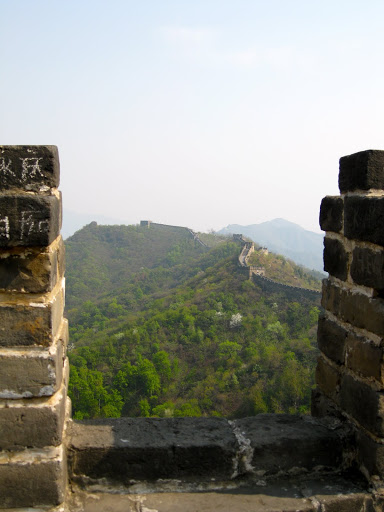 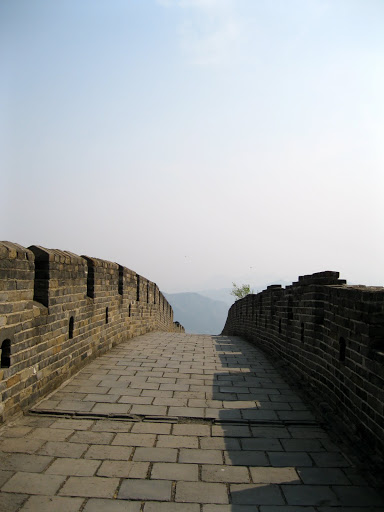 There are 22 watchtowers along the Mutianyu section. 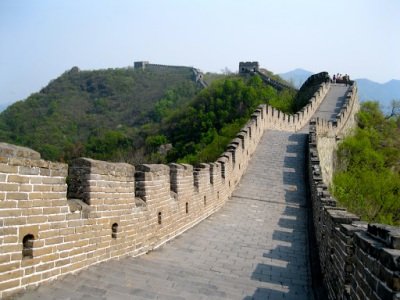 There are a few scattered and brave vendors who offer water, soda, and beer at various points along the Wall.  I think they make the trek up with their donkeys.

Then, they climb up these access stairwells and camp out, waiting for thirsty hikers.
Near the end, we took a short video.
//www.youtube.com/get_player 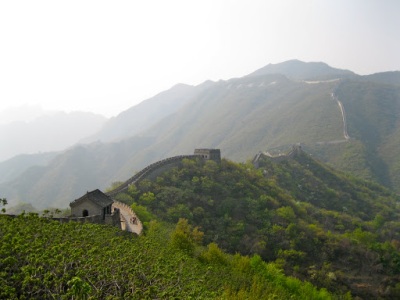 Maybe my favorite picture.
If you go to China, please promise me you will visit the Great Wall.  And drink at least one milk tea.  Both will inspire you.