I have expressed my feelings for Matthew in many ways, but never before by belting out an over-the-top ballad under the spinning lights of a disco ball, accompanied by a friend’s impassioned and jangling tambourine.  Just another Saturday afternoon.

Matt was able to spend 3 weeks in China, and it took me about 3 minutes to feel like he’d always been with me in Hangzhou.  We shared an umbrella to escape the relentless sun; he carried my purse; I held his hand.  Today on the bus I saw a girl falling asleep on her boyfriend’s shoulder, and I was at once so warmed and so sad that I almost moved seats.

After our hilltop engagement, I wouldn’t have thought twice about quitting my job at HFLS if it meant I could keep bouncing around this country with Matt.  To share the China I love with the man I love felt like the most natural thing in the world.

We spent the first day of our engagement in this blissful little bubble because although we’d called our parents from Baochu, literally no one else on this continent knew our news until much later that evening.  And it wasn’t until Easter Day that I was able to tell Trisha; it was killing me not to call her, but I wanted to tell her in person and I wanted Matt to be there.  We had plans to meet her at the only Catholic church in Hangzhou and then attend brunch at our favorite Western restaurant.  I loved telling her with the backdrop of the ceremony and solemnity and celebration that comes with a Catholic Easter, familiar to us both.

I had to work on only 8 of Matt’s 20 days in China, which meant we had generous amounts of time to visit my favorite places in Hangzhou.

Matt in the bat cave. 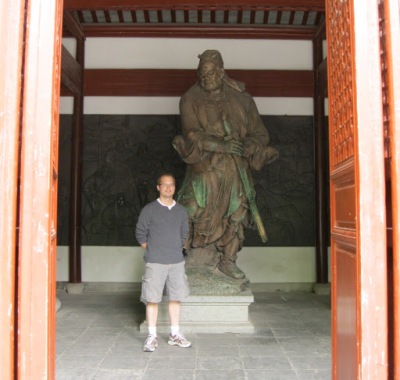 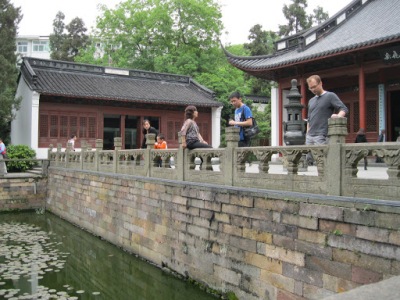 Matt absolutely destroyed the kilo of bullfrog that we ordered.

Fresh shrimp that we picked out from a tank. 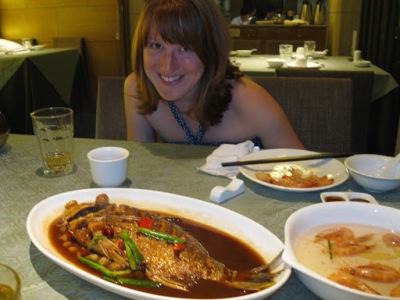 The de-lish fish we chose as we entered the restaurant. 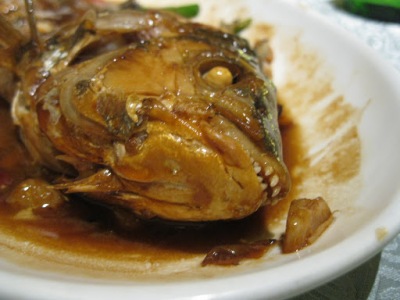 Check out those choppers!

Matt at my very favorite place in Hangzhou, Faxi Temple. 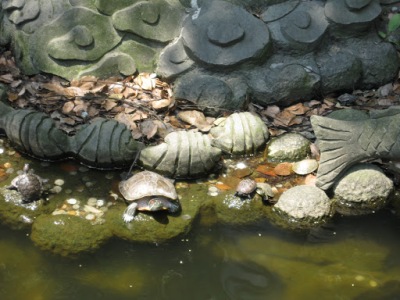 The first lotus blossom of the season!  Water gardens of these will soon line the lake.

I also got to show him off to my students.  That first week back after Beijing, I told every single class of mine about our engagement, and after listening carefully and internally translating what I’d told them, they all erupted into applause.  And when Matt was present for the announcement, I was afraid that a few of them would just fall sideways off of their chairs.

But nothing, nothing topped the response my Thursday afternoon Junior 1s had to Matt.  I commonly think of them as my shyest students, so I wasn’t surprised when, with a few minutes at the end of class to spare, I asked if they had any questions they wanted to ask him and they were silent.  They often need a little time to formulate questions in English and will use each other as resources, so I was also not surprised when they started whispering to each other.  I was surprised when one of the girls suddenly said, “One, two…three!” and the class responded, “KISS!  Kiss kiss kiss kiss kiss kiss kiss!”

I’ve mentioned how expressive these students are, so you can imagine the reaction of these 12-year-olds when I burst into laughter and blew Matt a little kiss, which he pretended to catch.  Their little desks and little bodies were just rocking back and forth with screaming laughter, and thus encouraged, Matt planted a kiss on my cheek, and I was seriously worried someone was going to get hurt in the melee that followed.  I imagine this is what it would be like if Justin Bieber kissed Selena Gomez in public, except none of my girl students were trying to hurt me.

And speaking of the Biebs brings me back to where this post began.  The weekend before Matt had to leave, our good Chinese friend Anna (who’s visiting MN this fall!) and her husband, Lee, treated us to our first KTV experience.  I love America, but everything we do with karaoke is wrong.  Instead of the back corner of some bar where a bunch of people heckle their maybe-drunk friend as he butchers “Friends in Low Places” and a bunch of strangers feel partly sorry for him but mostly enjoy his humiliation, imagine that it’s just you and your friends in a posh, dark, private room with sleek booth-benches and low tables.  In front of you is a wide flat screen, 2 microphones, 2 tambourines, and a touch-screen song selection station.  Someone cues Lady Gaga, and suddenly everyone is on stage.

Anna, Lee, Trisha, Sabrina, Ian, Matt and I spent 4 hours singing our hearts out to each other.  There was dancing, there was laughing, there were songs I haven’t thought about in years and somehow remembered the lyrics to (looking at you, Bette Midler and Hootie and the Blowfish), and miraculously, we didn’t even come close to exhausting the cache of Western songs at this particular KTV.  So we’ll be back.  If anyone ever invites you to do this, think only of the immortal words of Taylor Swift: “It’s a love story/baby, just say yes.” 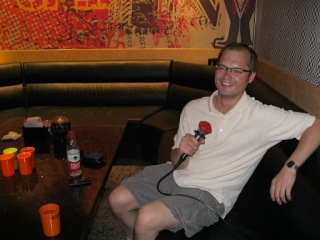 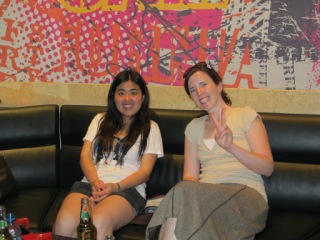 Sabrina’s rendition of “Single Ladies” was probably the biggest hit of the whole day! 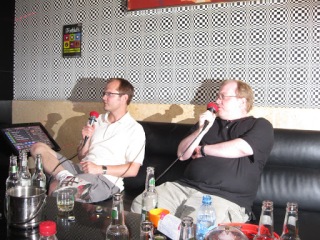 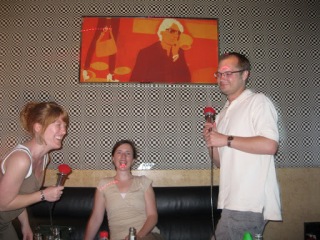 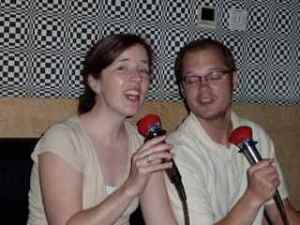 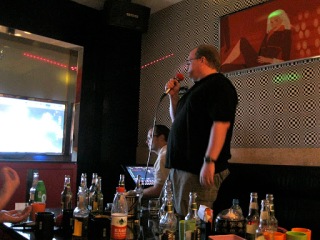 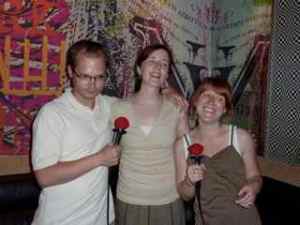 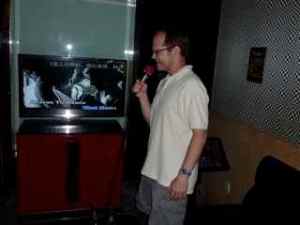 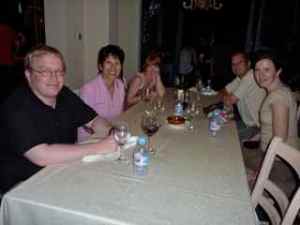 We celebrated our singing talents with paella at La Pedrera later that night.

The night before Matt had to fly back to Minnesota, he suggested that we relive the day of our engagement and hike up to Baochu around sunset, then have dinner at the restaurant we dined at that first night. 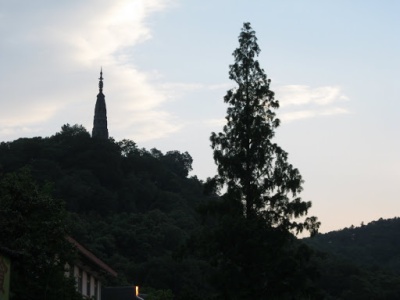 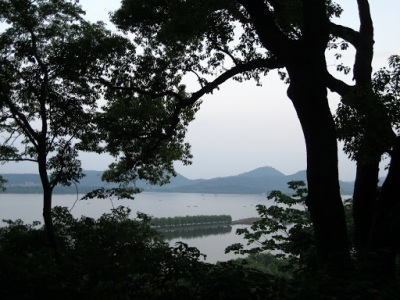 The teahouse where we ordered celebration Longjing tea and called our folks to share the happy news. 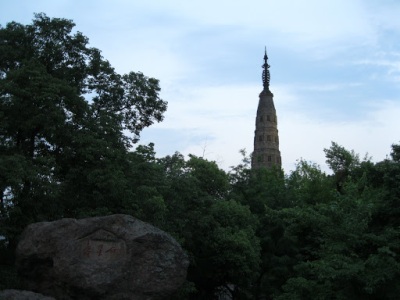 The night was hot, so we were able to sit at the same outdoor table, and the same woman was working, so she ordered us the same dinner we’d first enjoyed.  The restaurant is nothing special, but it is one of those places that only Chinese people visit, so they don’t have a picture or English menu.  The woman who served us offered her recommendations based on her limited English and my extremely limited Chinese, and our meal was perfect.  The second time being there, I really wished I could have told her that both times we visited, we were celebrating a new life together.  But I have a feeling that in the way we sat, how we looked at each other, and how we laughed, she might have sensed a love song.