In need of a little pick-me-up after Matt’s departure, I spent last weekend in Shanghai and treated myself to what turned out to be the nicest hotel I have ever stayed in (so please excuse my nerdiness in posting lots of pictures of the room).  I wanted to swim in a pool, work out in a fitness room, sleep on a soft bed, and maybe even watch some Western TV.  China has taught me many things, among them: I don’t need to stress out about work the way I had been; I need to make room in my life for the things I love, like writing; and it’s important to take care of myself.  While the room was expensive and I certainly could have done more touring around the city, I felt completely rested and calm and generally buoyant when I made it back to Hangzhou on Sunday afternoon.

On the train.  Get used to this dress, because it’s the only outfit I brought with me.

The lobby of Hotel Indigo.  It’s an Eastern hotel chain with some very Western comforts. 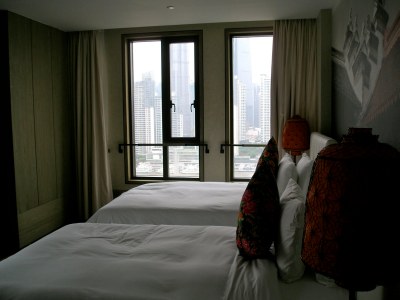 The room was on the 21st floor and overlooked The Bund.  Spectacular views.

The shower was one big room with a claw-footed tub and windows.  See the ship sailing by?

This is the control panel for the toilet, which included a heated seat and a bevy of bidet options. 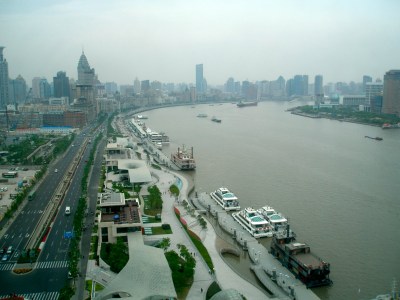 The view from my window.

The view from my other window.

Softest bed I’ve slept on in a loooong time.  Not to be a big baby, but my bed in Hangzhou often leaves me with a sore back and hips.

The hotel also had a library with Macs and real books!  (I felt like Owl Eyes; English nerds, you know who I mean.) 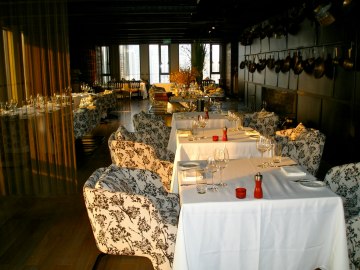 The restaurant on the 29th floor, called CHAR.

Perusing the menu before the restaurant officially opened.

Sunset from the Indigo’s rooftop bar.  The view from up here was truly amazing; the only disconcerting part was the thick brown glacier of smog that glided in around 6:30pm, completely obscuring the far reaches of the skyline.

Another view from the 30th floor.

The city at night.

I did actually leave the hotel on multiple occasions- to eat, mostly- and on Sunday, I decided to check out some wedding dress shops.

Like any bridal store, you can find lots of spectacularly hideous dresses for both brides and bridesmaids here, but I did find a nice selection of really beautiful dresses too.  I intended to try some on just for idea-gathering purposes, but at the 3rd store I visited, I tried on a dress that I really liked.  Even then, I didn’t intend to buy it because it wasn’t perfect and I had no idea how to communicate the alterations I wanted to the very friendly women running the store.
When, out of curiosity, I inquired about the price, they were able to communicate that they would make me a new one, from scratch, if I wanted to buy the dress.  So then I asked, just for fun, if they could change the color, remove a few things, and change the length.  When they showed me that they understood what I was asking and agreed it was possible, I thought…well, why not?

Signing the receipt!
I’ll go back to Shanghai on June 18th, right before I leave Hangzhou, to pick up the dress.  And no, I will not be posting any pictures of it, but if your name is Becca Nelson and I will be visiting you in Tianjin later that week, then yes, you can see it.  The rest of you will just have to wait. 🙂